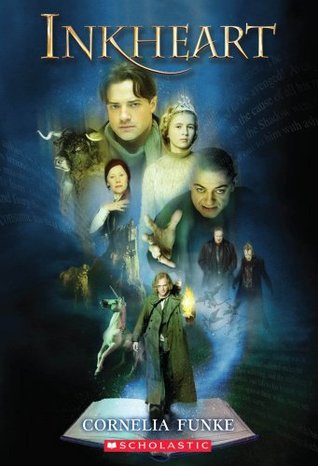 Twelve-year-old bibliophile Meggie’s dad Mo, a craft bookbinder, mysteriously refuses ever to read aloud to her. Fairly early on in Inkheart she discovers that this is because, nine years ago when she was just three, Mo was reading aloud to Meggie and her mom, Teresa, when he accidentally brought out of the book he was reading a passel of heinous rogues, led by the psychopathic Capricorn. To compensate, the book swallowed up an equal number of individuals from the real world, including Mo’s beloved wife Teresa.

Stories about books and bibliophilia are always an easy sell to me, so it’s hardly surprising that by and large I loved this. It’s a long book but I can’t say my attention ever really flagged: from time to time I had the fleeting sense that the course of events might have become unnecessarily convoluted but then always, before this had the chance properly to register, my attention would be caught by some new incident or flight of fancy or pleasing piece of description and off I would go yet again on Funke’s Grand Helter Skelter Ride.

If the book itself is great fun, the Scholastic paperback edition does its very best to reduce the enjoyment. I started out by reading the copy I bought myself a few years ago, but this soon became such an unpleasant experience that I went to the library and borrowed their copy instead. The library copy is of a later edition released to tie in with the 2008 movie, which means it has a different cover and some extra crap at the back — or “perceived added value content,” as I believe the jargon has it. Otherwise the production standards are just as poor: printed on yellowish blotting paper, pages so stiff you often have to wrestle to turn one rather than two at a time, a layout that contains the kind of bodgeries you expect in the ARC rather than the finished copy (look at the last few lines of page 135, for example; did they assign this job to an intern?), and a blurb written by someone who didn’t read the book.

Normally I’d be pretty tolerant of this sort of production BS, but Scholastic is a very wealthy company and, to focus on this book alone, it must have sold approximately 704 gazillion copies of Inkheart already. Some of the enormous profits the company has made from this book and its sequels could surely have been plowed back into improving the physical qualities of the countless reprints. The smug retention of the lousy production standards shows an appalling lack of respect for the material and of course for Scholastic’s readers. There’s really no excuse for the fact that this is such a nasty edition of Funke’s book.

At the same time as I bought Inkheart in paperback I bought a copy of its sequel, Inkspell, in hardback. The latter book handles a lot better, possibly simply because of the different binding. However, it’s even longer (by about a hundred pages) than Inkheart and I gather it ends in a cliffhanger to force us to rush out ‘n’ buy the third volume of what has become a trilogy, so I may not read it.