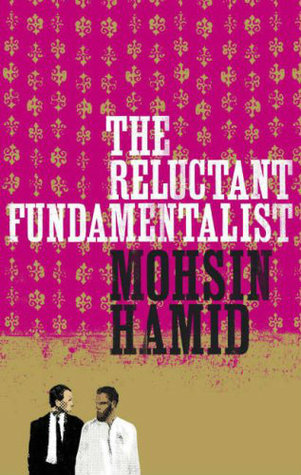 I picked up this shortish book on impulse recently and am very glad I did so. It was only when I got it home that I noticed (duh) that it had been shortlisted for the Man Booker back in the day — presumably 2007 or 2008. Somewhat to my shame, I found myself wondering if spotting the relevant line on the cover might have made it more or less likely that I bought the book: my (limited) experience with Booker winners has been I think generally favorable, but mixed.

Changez, a young Pakistani man, sits down at a market cafe in Lahore with an unnamed American visitor whose motivations seem from the outset a little shifty. In a single monologue, Changez tells the visitor over a period of hours about how, after a successful time at Princeton, he became a whiz-kid at a Manhattan asset-valuation company, Underwood Samson, but slowly, after the eye-opener of 9/11, became disillusioned with both his profession and his adoptive country, and decided to return to the simpler life in Pakistan.

The guiding principle of Underwood Samson as it advised companies how to become more efficient by paring “unnecessary expenditure” — which usually meant firing employees or enforcing pay cuts — gives the novel’s title its second meaning. The company insisted its analysts focus on the fundamentals rather than on abstracts like the human costs of their activities. Changez eventually became loath to follow this policy — i.e., a reluctant “fundamentalist.”

Interwoven with this is the story of Changez’s love for Erica, a young American woman from a wealthy background whom he met through his Princeton studies. He and Erica shared something that was way more than friendship but, to his ever-courteous dismay, could never blossom into full love because she was still in love with her childhood sweetheart, Chris, the man she’d have married had he not died young of cancer. Confronted by a rival who would forever remain unassailable through the advantage of dwelling in Erica’s idealizing memory, Changez had to merely hope that eventually Erica’s mood would change, that she’d “move on.” But she never did, and eventually he had to persuade himself, as a salve to his injured self-esteem, that it was really he who was rejecting her rather than the other way round.

The symbolism is surely fairly clear here. Both Underwood Samson, with its rapacious capitalism, and Erica, who, because of her memories of a golden past, cannot return Changez’s love (unless he pretends to be someone else, but that’s another story), whom he loves but can never possess, are representations of different aspects of the America that, rightly or wrongly, he’s become uncomfortable with and chosen to reject. Back in Pakistan now, teaching at a university, he’s become a political figure who’s portrayed in the Western media, largely because of his beard, as a potentially dangerous firebrand. Again the symbolism is obvious: we see the beard rather than the man, who’s in fact a pacifist.

That’s the essence of the lengthy tale that Changez tells his dinner guest. For the tale of what’s going on between the two of them we have to read rather more between the lines.

Hamid’s prose, through some of its structures and word-selections, has what seems to me a distinctly Pakistani cadence, a musicality that I heftily admire (and envy). It’s also (unfortunately for my sleep patterns) compulsively readable. Philip Pullman says in a cover quote that the novel’s “more exciting than any thriller I’ve read in a long time.” I’m not sure I’d go quite that far, but I certainly found it every bit as gripping as the best of thrillers. And it gave me a fair amount to think about, as I hope I’ve conveyed.

8 thoughts on “book: The Reluctant Fundamentalist (2007) by Mohsin Hamid”