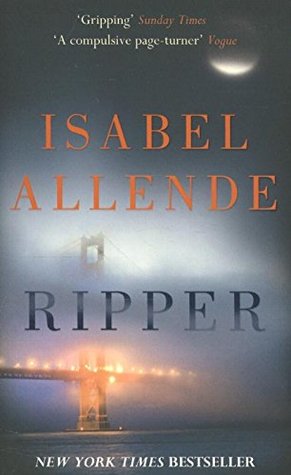 I bought this a while ago in the form of the Fourth Estate paperback. (Back in the dawn of time, Fourth Estate was a splendid UK indie publisher. I see it’s now just another organism in the Murdoch STD.) It was only when I started reading the book the other day that I registered that (a) the text has been photomicrographically reproduced from the hardback, and the font is thus minuscule (pun intended), and (b) the spine is of International Polygonics-style wrist-spraining stiffness, so that ideally you need the aid of a couple of bodybuilders to hold the book open. After about fifty pages of peering myopically into what seemed to be the jaws of a rat-trap, I surrendered abjectly and borrowed a copy of the hardback from the library.

Before I leave the Fourth Estate edition behind, the review quotes and cover puffs it bears are worth a quick look. We discover from People that this is a “race-against-the-clock thriller.” Booklist tells us the novel is “tightly plotted . . . and intensely suspenseful.” Library Journal tells us it has “a fast-paced plot.”

All of these critics and more clearly read a different novel entirely from the one I did. In my copy of Ripper, all the suspense, fast pace and thrill are confined to the last few score of its nearly 500 pages. Before that, one of the charms of the novel is that the plot meanders along, merrily digressing into ancillary stories that have nothing to do with the main thread but are (usually) engrossing in themselves. I found it grippingly readable because I was enjoying the characters and the experience of reading it so much, not because it was the thrill-ride that the blurb and quotes made it out to be.

The novel was, according to Allende’s note at the back, born from an idea put forward by her agent that Allende and her husband, mystery writer William C. Gordon, should collaborate on a crime novel. Apparently this scheme lasted about twenty-four hours before the couple realized it was a surefire recipe for divorce, and so they went back to writing solo. Ripper, then, might be taken as Allende’s essay at writing a crime novel except for the fact that what she’s produced is really a mainstream, multi-threaded novel that happens to have, as what after a considerable while turns out to be its backbone, a mystery/detective story. For a lot of the time, though, the crime element is not so much playing second fiddle as stuck somewhere at the back of the strings.

Teenaged Amanda Martín and her grandfather Blake, both based in San Francisco, are part of a small ring of players around the world of the online roleplaying game Ripper (named for the infamous Jack).

Recently the players have decided that, rather than keep on solving fictional mysteries, they should turn their ratiocinative skills to real-life crimes. An astrologer acquaintance of Amanda’s family has predicted a series of murders in San Francisco, and the first of these—a school sports coach is discovered with a baseball bat inserted privily—seems as good a place as any to start.

There’s a string of ever more grotesque killings, although it’s noteworthy that the grotesqueries are contributed postmortem: evidently the killer wants to make his or her point but has no sadistic intent. In due course, what seemed to be merely crimes affecting strangers begin to come closer to the Martín family—and not just because Amanda’s father Bob, as a senior cop, is involved in the hunt for the perpetrator. Amanda’s mother Indiana, a voluptuous alternative therapist long divorced from Bob, could be the killer’s next victim, and others close to her may be at threat . . .

That sounds like the description of many a crime thriller. However, to repeat, what I’ve just outlined is only one strand of the multi-stranded plot. For much of the book it reappears only occasionally, as instead we explore the lives of Indiana, Bob, Blake, Indiana’s lover Alan, Indiana’s would-be lover, disabled vet Ryan, Ryan’s military dog Attila, Indiana’s other would-be lover Gary, gay local waiter Danny . . . and I’ve probably forgotten a few!

By contrast, we don’t learn a great deal about Blake’s and Amanda’s fellow-players of Ripper: they’re given surprisingly short shrift, and the game itself, including the way its rules might contribute to the process of detection, is barely developed. All we get from the game is, essentially, that the players assemble online every now and then, discuss latest events in the serial-killer case, and instruct Blake to go gig out further information—in other words, the whole conceit of the game playing a part in the case is not so much peripheral as unnecessary.

There are other nits I could pick. The occasional plugs for husband William C. Gordon’s mystery novels—even to the extent of introducing a minor character who’s supposedly the son of Gordon’s series detective!—seem self-indulgent (to put it mildly) rather than quirky. And, although someone’s thanked in the Acknowledgements for having combed any inconsistencies out of the text, I found quite a few:

Example #1: Ryan lives alone in a loft above an abandoned workshop, yet there’s brief mention of his building supervisor.

Example #2: On pp185–6 we’re told that Bob has always known Amanda will devote her life to crime, in one way or another, yet on p189 we find him hoping her faddish “fascination with crime would soon pass.”

Example #3: Ryan embarks at 9pm on a journey that’ll take “a few hours” thinking he’ll have plenty of time to get there and perform extensive preliminaries before saving the life of someone due to be “executed” at midnight. This trained Navy SEAL wouldn’t think to allow for contingencies? Even without contingencies, if you add “a few hours” to 9pm the chances of him missing that midnight deadline (pun not intended) are surely pretty high.

It’s easy for criticisms like these to overwhelm the praise, giving the impression that what’s overall a truly excellent book is a stinker. I thoroughly enjoyed reading Ripper, and rollicked through what’s a very long novel with almost frightening speed. It has a good measure of humor, lots of lovely tale-telling, plenty to absorb the reader (including the crimes and the graaaaaduuuuuual teasing out of the motive behind them), dollops of wry compassion, and, yes, toward the end, some genuine thrills. If you approach the book expecting a crime thriller you’re likely to be disappointed, but if you read it for itself rather than for some preconceived stereotype—which is surely how we ought always to read books anyway—then with luck you might be as captivated by it as I was.