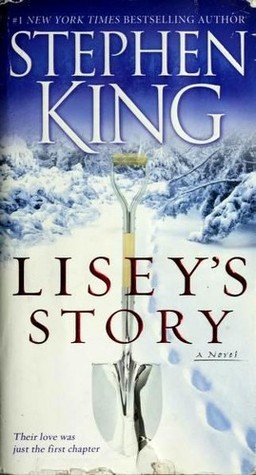 A few days ago I read a Guardian interview with King in which he said that his favorites of his own books were Misery, The Stand and Lisey’s Story. While I’d read and appreciated Misery and The Stand (although not the oh gawd even flippin’ LONGER Director’s Cut version), I’d always assumed Lisey’s Story was one of those minor ones I could read or not read without it having much effect on my assessment of King’s work.

I then realized that Lisey’s Story was one of the handful of unread King books on my shelves — I picked it up at some point on the grounds it must be one of his lesser-known outings, more fool me. A day or two later I tripped over a reference claiming that it wasn’t just one of his Fave Three but actually his Fave of All Time.

Yup. That was enough to convince me.

I really ought to read King more often. The reasons are manifold. First, whenever I read one of his books I enjoy it — sometimes more, sometimes less, but I can’t recall a stinker. Second, despite what the sneering critics might have said of him a few decades ago, he’s now established as a figure of some significance in 20th/21st-century US literature. Third, even though he’s writing for a “bestseller” readership, his books very often have a narrative subtlety and style — and indeed intellectual heft — that some of the litcrit crowd’s darlings might envy. In fact, I’d recommend that any would-be writer read themselves a bucketful of King to learn exactly what can be done while still keeping the connection with the average Joe Public reader.

(Decades age I was chatting with A Very Famous Author and mentioned that I thought, despite the critics, Stephen King was pretty damn’ good and enjoyed reading his books. She leaned forward. “Don’t tell anyone,” she said, “but so do I.” Nowadays I imagine that she, like me, would not be so shy.)

Lisey is the widow of Scott Landon, a bestselling author who died of some obscure disease a couple of years ago. She’s still in grief for him, still loves him — even though it’s obvious to us as readers that he was a pain in the ass, from his monumental ego to his frequent recourse to infantile language and mannerisms. On the other hand, if you’d had the childhood he had, chances are you’d be even worse.

Lisey’s coping not just with her widowhood but with the fact that all the academic types are howling to get their mitts on whatever Scott left behind, from signed books to research folders to (oh, drool) unpublished manuscripts. She and only she knows that much of Scott’s inspiration came not just from his hellish childhood but from his (and his big brother’s) ability to seek solace in a reified otherworld called Boo’ya Moon — a place that’s in part Paradise, in part Hell, where there’s a pool of healing that’s also somewhere that writers and others can go to find inspiration in the form of language or ideas. There are hideous dangers there too, some of them all the more hideous because they seem almost welcoming.

The language that Scott has brought back with him (and that King frequently reproduces) can become irritating: “the bad-gunky” for (to approximate) “inner evil,” for example. (Did I mention that Scott’s a pain in the ass?) A lot less irritating is King’s use of repeated catchphrases — like “as the saying is” — to create the sense that this is not so much a printed tale to be read as an oral tale to be heard, and passed down.

The narrative has at least three timelines, something that, even before you add complexities, is bound to require some considerable skill on the part of the writer. I was astonished by how well King managed to keep this narrative sophistication under control. Never at any point was I lost as to where or when I was; never did any of the essential spatial/temporal discontinuities interrupt the flow of the tale. (Again, I’d recommend any would-be writer to read this book to learn what can be done with supposedly straightforward narrative.) No wonder King is proud of his achievement in this novel. I cannot offhand recall another popular novel that attains this level of sheer storytelling skill; I can recall oodles of critically acclaimed, even Booker-winning items that don’t.

So much for my admiration for Lisey’s Story. How much did I actually enjoy it? The answer to the latter question is a little more complicated.

It’s slightly and inanely colored by the fact that, although early on the text told me that Lisey’s name was to be pronounced “leecee,” I kept reading it as if to rhyme with “Size A.” Eventually I just gave up and let my brain pronounce the name how it wanted to, but for the first few score pages this aural disagreement gave me a bit of a reading hiccup. Another silly extraneous factor is that my dislike of Scott definitely had an adverse effect on my enjoyment. Plus, I’m not really a horror fan, and there are some (very effective) passages of gruesome horror here.

Where the book really soared, though, was in its imaginative passages. The atmosphere around the pool where all writers go for linguistic or conceptual inspiration (and anyone can go for healing) is brilliantly imagined, as is the fear in the Fairy Forest in Boo’ya Moon when the Laughers are shrieking to the moonlit sky. (I call the pool the common stockpot, which is a lot less romantic.) The switchings from one timeline to another were quite masterful: jealous, jealous. The disparate relationships between Lisey and her three sisters were really quite wonderfully handled . . .

And yet I’d not personally put Lisey’s Story at the top of my list of King novels. I’m not sure why this is so. Maybe it’s because my own faves among King’s novels are pretty idiosyncratic, being mainly books that, so far as I’m concerned, go ignored or under-regarded by his devotees and it seems by King himself: Dolores Claiborne, Gerald’s Game, his wonderful M.R. Jamesian ghost story Bag of Bones . . .

As I say, I have a few unread Stephen King books on my shelves (a couple with Peter Straub, another much-admired author) and I really oughter get round to reading them. Perhaps I should turn this into a little reading project. On the other hand, unlike Lisey’s Story, they do tend to be so effing long . . .