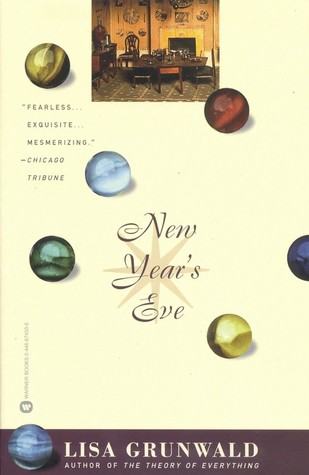 I came to this novel off the back of abandoning another. The book concerned — which shall here, as is my custom, remain anonymous — was only 165 pages long so, although it looked potentially a bit uninspiring, I reasoned I should surely be able to get through it easily enough and the experience might be good for my moral fiber, or something of that nature. Alas, I’d underestimated how boring boring can be, so I lasted just forty pages before it was a case of either throw the book at the wall or seek counseling.

Whatever the case, New Year’s Eve started off at an advantage because it wasn’t the other book. It’s also quite a lot longer and, being slightly atypical of my usual reading, reassured me that I was likely to get at least some threads of that moral fiber.

Erica and Heather are twin sisters, Heather being 22 minutes older and, since their childhood, the bossy one. Now that they’re in their thirties, Erica and Heather give birth just a few weeks apart to two children: David (Heather’s second) and Sarah (Erica’s first). David and Sarah become inseparable: they’re in effect another pair of twins. But then, when they’re aged three, David is killed in a car accident.

Soon after, Sarah begins to claim she’s in communication with David, who’s living in a very unusual version of Heaven. At first everyone assumes that David has become Sarah’s equivalent of an imaginary friend, but then . . .

I discovered a lot to like about this novel, and I certainly read it quickly enough, but oddly I found that this supernatural theme — which I assume was the book’s raison d’etre — was more of a mildly irritating distraction than anything else, like static on a radio broadcast. Far more interesting were the portrayals of Heather and Erica and their retired dad, and the relationships between them. Heather, we learn pretty swiftly, is and always has been a bitch. The submissive Erica, a far more sympathetic and respectworthy character, has been wrong to kowtow to Heather all her life — to feel that she must constantly earn Heather’s love when in reality Heather lacks the ability to love — and by the end of the novel Erica herself is beginning to realize this. Dad, who shares Heather’s innate selfishness, is now showing signs of dementia, or something approaching it, and this is making it doubly difficult for him to appreciate that he no longer rules the roost.

One problem the book has is that, outside those three, the characters seem barely sketched in. Sarah seems like just rentachild; her elder cousin Jeffrey is even less in focus. The two women’s husbands seem merely ciphers: Erica’s Edgar is a good egg and Heather’s Richard is an older stuffed shirt, but that’s about it.

The chapters hop about in time quite a bit, with most of them being set on a New Year’s Eve, sometimes during the girls’ childhood, more often in the 1980s and early 1990s. I found this chopping and changing of the chronology worked very effectively in telling the story, with Erica being our constant narrator. I was less happy with the narration itself, which seemed to me ever-ready to default to a sort of slick readability at the expense of the kind of depth the tale was crying out for. This is obvious in the frequent instances of pages-long bits of dialogue that consist of rapid exchanges of very short sentences. As I say, it’s slick — these sections are very easy to read (they’re also, as I know, incredibly quick to write) — but it very soon becomes exasperating. Here’s an example, chosen at random:

You may understand why, when I came to this one-line paragraph late in the book (p328), I rocked with laughter: “It was the kind of dialogue that can make grown people weep.”

Yet, when Grunwald resisted the lures of such self-indulgence, the text often became quite powerful, with insights into characters and situations that kept me constantly engaged. And there were frequent little morsels to relish, such as, on page 361, little Sarah’s version of a well known song:

Oh, Susanna,
Oh don’t you cry for me,
For I come from Alabama
with a bandage on my knee.

You can bet that’s the version I myself shall be singing from now on.