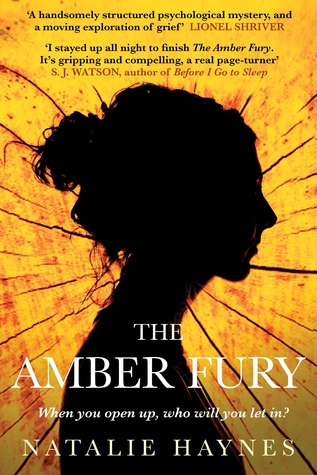 Promising young stage director Alex Morris is, not unnaturally, devastated by grief when her fiance, Luke, is murdered on the street by a stranger. Knowing how desperate she is to get away from London and all the reminders of what happened, her old drama tutor Robert offers her a job in Edinburgh using her ancillary qualification in dramatherapy to help recalcitrant kids at a special-needs unit.

The most intimidating group put in her charge is a small class of teenagers, only five strong, whom she somehow manages to get interested in the classic Greek tragedies. Although progress tends to be a matter of one step forward, two steps back, the kids do seem to be responding to her work with them — to the amazement of all concerned, not least Alex herself, who’s still incapable of struggling free of her world-filling grief over Luke’s death. What she doesn’t realize until far too late is that one of the kids is taking the lessons of the Greek tragedies dangerously to heart . . .

The tale’s told primarily by Alex herself, recounting both what happened during the months she was teaching at the Unit and what’s going on now, as she confronts hostile and friendly lawyers because of some initially unspecified disaster. A secondary narrative strand comes from diary entries written by the most interesting and intelligent of the five kids, the deaf Mel (for Melody). Although I could fairly quickly work out the rough outlines of the disaster, Haynes kept me on the edge of my seat by the incredibly skillful way she slowly revealed a detail here and a detail there, as if I were seeing a picture at first only blurrily through misted glass but then the mist gradually evaporated.

The Amber Fury, retitled The Furies in the US, is not without its imperfections. Late in the book, Alex is being groomed to take over as director of the Unit when Robert retires, which seems hardly plausible bearing in mind she’s barely qualified to be teaching there in the first place. There’s a feel-good epilogue that I really, really could have done without — it’s like one of those dreadful happy endings producers insist directors tack on to movies because everyone knows we’re all too infantile to cope with sadness.

But little blemishes like these are overwhelmingly outweighed by the novel’s many merits — not least the fact that it’s an absolutely gripping read. Some of the best bits, for me at least, are the fairly lengthy discussions Alex has with the kids about the dramas they’ve been reading (or, kids being kids, quite often not reading). Although I’m aware in a general sort of way what the more famous of the Greek tragedies are about, I’ve never really given them much thought, far less actually read them. But Alex’s enthusiasm for these writings (which I gather reflects the author’s own), and the way she uses them to bring the kids out of themselves as well as, unwittingly, herself out of her blanket of grief, had me eager to learn more.

I’m not sure how to classify this novel in my own mental library. A couple of the cover quotes call it a “psychological mystery,” which seems inapt, because there’s no real mystery on offer, no attempt to deceive or misdirect, just the gradual unveiling of the reality of what happened. The term “psychological thriller” is more appropriate but at the same time really quite misleading, in that our central characters are never in any great danger beyond the hazards of spending time among problem kids who can turn violent on occasion. What makes the book spellbinding, what makes it thrill, is — aside from the intellectual excitement offered by the discussions of the dramas — the way that Haynes so effortlessly (or seemingly so!) draws us into Alex’s and Mel’s worlds, so we find ourselves living their characters.

I also loved the depiction of Edinburgh, where almost all of the novel is set. My mother spent the last thirty or so years of her life there, having fallen in love with the city (and my dad) during her time at Edinburgh University, so I got to know the place reasonably well during many family visits. A lot of the street scenery Haynes describes is familiar, but more importantly I think she caught the feel of the place, its weather (although I don’t recall it being always that bad!), and the contrast between the Festival weeks, with all the Fringe lunacies, and the somewhat staider betweentimes. To be true, this isn’t Ian Rankin’s Edinburgh, stripped of its pretensions to reveal the sordid underbelly (or whatever), but it’s certainly more than a superficial portrayal.

I see that Haynes has written a couple of further novels since this one, which was her debut. That’s a nuisance, because on the strength of The Amber Fury I’m going to have to get hold of them . . .