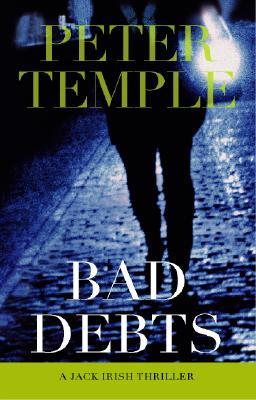 A few months ago Pam and I watched, over a period of two or three weeks, the three Jack Irish TV movies and the second of the two series that followed those movies (our library didn’t have the first series). The stars of the show are Guy Pearce, Aaron Pedersen and, at least in the movies, Marta Dusseldorp. These Australian outings are much recommended, with some great character actors supporting the principals.

So, of course, I decided to get hold of the first novel in the late Peter Temple’s series that formed the basis for the TV pieces. For obvious reasons I delayed the reading for a few months to make sure the first of the TV movies was no longer fresh in my mind (as we old geezers like to euphemize).

The long and the short is that I enjoyed Bad Debts rather a lot less than I thought I was going to.

The setup’s great. After the murder of his wife, lawyer Jack Irish hit the bottle. Now he still does some low-level lawyering, but most of his time is spent working as a debt-collector, conducting dubious business around the racetrack and, as a therapeutic hobby, serving as much-derided apprentice to a master-cabinetmaker. Checking his voicemail after a brief absence he finds a message from a client, Danny, whom he represented a decade ago — so long ago he has only the vaguest recollection of the case. Soon Jack learns that, by the time he played that message, Danny was dead, shot down in a parking lot by the cops he was supposedly threatening with a gun.

Reluctantly, feeling his representation of Danny back in the day was somehow inadequate, Jack essays to reinvestigate the old case — the hit and run killing of an environmental activist — and discovers there was indeed more to it than met the eye. Slowly he uncovers a major conspiracy involving corrupt cops and rising to the upper levels of state politics . . .

I was initially very much engaged, too, by Temple’s prose. Jack Irish is an entertainingly laconic, cynical observer of the human condition and indeed of his own foibles — a narrator much in the Philip Marlowe vein, indeed, but with a strong Australian accent. The language is extraordinarily salty, to the extent that it might upset some; and there’s a fair deal of Ozzie slang mixed in among the rest. (Some of the words I didn’t recognize, though I had no difficulty teasing out their meaning from context.)

A few chapters in I was singing the book’s praises, and then, I dunno, I began to get a bit bogged down in it. The sessions spent cabinetmaking and at the racetrack began to seem overextended and rather dull. (Maybe not so dull if you’re into woodwork or horse-racing, but alas . . .) Matters weren’t helped by the fact that the plot really is quite exceptionally convoluted, and in places I was having to think hard to work out who was who. And the droll observations that had earlier made me grin now seemed a shade long-winded, obstructions to the telling of the tale rather than the oil that made it flow so easily.

There were also a couple of sequences where I had difficulty working out what was going on. One of them I remembered from the movie — it’s pretty climactic scene — and I actually read the relevant paragraphs three times to make sure I hadn’t missed something. (To be enigmatic, a gun seems from the written description to appear from nowhere.)

So, although it grieves me to say this, when I reached the final page of Bad Debts it was with something of a sigh of relief. It’s not that the book’s bad (far from it: it has many riches), just that it seemed to be way harder to get through than it should have been. Other readers may find exactly the opposite.