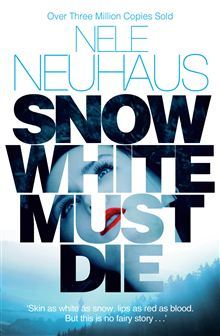 A long, moderately involved police procedural that reads throughout (at least in the English translation) as if it’s sorely in need of a final polish.

Ten years ago young Tobi Sartorius was sent to prison for the murder of two teenage ex-girlfriends on a night when he was drunk to the point that he later could remember nothing of what might have happened. Still, the circumstantial evidence against him was so strong that even he believes he must have committed the double slaying. Now that he’s been released he returns to his home village of Altenhain to discover his parents have split and his father is living as a reclusive, persecuted pariah.

Soon an attempt is made on the life of Tobi’s estranged mother and, in investigating that crime, detectives Pia Kirchhoff and Oliver von Bodenstein of the Division of Violent Crimes in Hofheim find themselves drawn back into re-investigating the crime of which Tobi was found guilty.

Tobi is not entirely friendless. A childhood friend, now the famous actress Nadia von Bredow, visited him frequently in the joint and, since his release, has initiated a passionate romance. And a Goth teenage delinquent, Amelie Fröhlich, a newcomer to the village, befriends him and mounts an investigation of her own. Disturbingly, Amelie strongly resembles one of the murdered girls, both of them bearing an imagined resemblance to the character Snow White.

Characterization is not this novel’s strong point. Although the two main cops live and breathe, so to speak, as do Tobi, Toby’s dad, Nadia, Amelie and Amelie’s autistic friend Thies, I had constant difficulty keeping track of the rest of a fairly large cast (whole passels of cops, just for starters), most of whom seemed to exist only as names or at best sketched stereotypes. In particular, there are two wealthy families of influence in the tale, and each time the narrative returned to one or other of them I had to pause to work out which one it was. Was this the family where the wife was a local doctor, or was that the other lot? Just to add to my difficulties, both the relevant husbands are ephebophiles.

There are some great set-pieces, notably the one in which Amelie and Thies are trapped in a darkened room that’s being flooded. There’s also the vivid image of the murdered “Snow White” still being preserved and revered. Elsewhere, though, there’s a sort of cumbersomeness about the way proceedings are handled, and I felt this most keenly during the many passages concerned with matters extraneous to the investigation, such as the breakdown of Oliver’s marriage — a plot strand handled so maladroitly, I felt, that I found it very hard to give it credence.

All in all, then, Snow White Must Die was for me very much a mixed bag. At this point I’m not sure if I want to give Nele Neuhaus (whose novels tend to be long) another try. We’ll see.