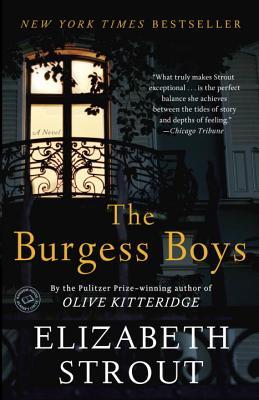 I’m really not quite sure why I enjoyed this book as much as I did. It’s for the most part extremely well written (the two or three bits of ugly phrasing — no more than two or three — jar far more than they would in a less accomplished text), but then I read quite a lot of very well written books that have more compelling plots, more incident and more sympathetic characters. Yet for some reason I kept turning the pages of The Burgess Boys, rapt.

When their mother died, the two Burgess boys, Jim and younger brother Bob, left their hometown, Shirley Falls, Maine, for NYC to follow divergent legal careers: Jim became a high-flying defense attorney after succeeding in a spectacular case not unlike the O.J. Simpson one; Bob, by contrast, joined the public defender’s office. Susan, Bob’s twin, stayed on in the family home in Shirley Falls to raise her son Zach, now an ungainly teenager who has difficulty fitting in. (He gives the impression of borderline autism, but apparently that’s not the case.)

One day Zach causes an outcry when he hurls a frozen pig’s head in through the door of the local Somali community’s mosque. The law prepares to throw the book at him, the Somali refugees are understandably outraged, the people of Shirley Falls come together in a great popular expression of solidarity with the newcomers, and the Burgess boys step in to try to get the situation under control. Go-getter Jim manipulates and politics for all he’s worth; easy-going Bob, who’s spent a lifetime being the butt of Jim’s insults, just attempts to offer support to Zach and Susan — to be there for them.

Most of these characters are pretty repellent. Jim is what is called in technical terms a first-rate narcissistic shit. (In fact, too shitty, I think: his incessant denigration of Bob goes beyond the credible.) Susan is no prize either: embittered even before her husband ran off, she seems devoid of kind thoughts for anyone except, arguably, Zach. Jim’s wife, heiress Helen, is a fabulously wealthy airhead whose principal hobby seems to be shopping for expensive stuff she doesn’t really want. Pam, the wife who divorced Bob because he couldn’t give her children but claims still to be his best friend (and is regarded as such by him), is now doing her level best, married to a rich husband, to turn herself into another Helen. Jim and Helen’s best friends, Alan and Dorothy, are equally ghastly. And so on . . .

So who are the characters I found I could like? Well, Bob, even though he’s consumed by guilt for the accident when he was aged four that killed their father. Margaret Estaver, the Christian minister who’s made herself a true friend of the Muslim Somalis. Abdikarim Ahmed, the Somali who, initially as horrified as anyone else by Zach’s crime, soon perceives that he’s just a confused, frightened boy, and persuades the others in the community to forgive him and indeed reach out with love to him. I also, somewhat ashamedly, quite liked Pam, however shallow and mercenary she might be.

The plot meanders quite a lot, its main strand being the events of the year or more in the Burgess siblings’ lives after Zach’s crime. There are plenty of flashbacks and sidebars, though, and a fair few chapters where nothing of significance seems to happen beyond, I guess, character development. I did get pretty weary of character development after a while . . . and yet, as I’ve noted, the pages kept turning. I think what kept me absorbed was the fact that Strout has created, albeit in some regards rather heavy-handedly, a complete environment in which I could immerse myself.

Slow-moving and populated for the most part by somewhat vile characters, The Burgess Boys is not I imagine a novel for everyone, but it worked for me and, who knows, might work for you.