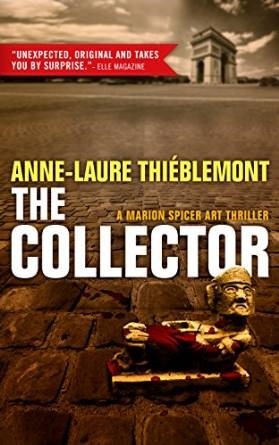 In Paris, Marion Spicer is a youngish investigator working within the art-marketing world to help track down stolen art and authenticate (or otherwise) items that have been offered to the major auctioneers for sale. What she hasn’t realized until now is that her long-estranged father took on a new name and became the legendary collector of pre-Colombian artifacts Edmond Magni — such a titan of the art-collecting world that the mere presence of an item in his vast trove is enough to persuade the curators of the Louvre and other museums of its artistic and archaeological value.

More than that, Magni has just died, and he’s left his collection, worth many millions, to Marion . . . on the seemingly quite irrational condition that she can track down and buy back three specific sculptures that he sold. Otherwise the (incomplete) collection goes to his longtime assistant, the creepy Gaudin.

With luck, that condition of Magni’s bequest won’t prove to be a death warrant for Marion . . .

I read this book as an ARC in which the text had certainly not been proofread; neither had it been, I hope, copyedited. So I can’t really judge the book in terms of the writing and/or translation; hardly a page went by wherein I didn’t wince. I assume the text was heftily cleaned up before publication.

(As an aside, why do publishers do this with ARCs? Surely you want to give reviewers the best possible impression of your new book? I have a revised edition coming out of my YA book Debunk It, and was horrified to discover the publisher had simply used the old index in the ARC — meaning all the new copy wasn’t indexed and lots of index listings referred to stuff that was no longer there, while repagination meant that anyway a lot of the page references were bogus. How better to piss off reviewers? [/rant])

Really there are two if not three mysteries for Marion and her friends and allies to solve (assuming the people she thinks are her friends and allies aren’t really her enemies). First and foremost there’s her father’s purpose behind the curiously stipulated will: he was a man who never did anything without a reason, no matter how twisted (or spiteful) that reason might be. Then there’s a couple of murders that may or may not have been committed by the same hand. Oh, one more mystery: who was it who tried to kill Marion in a near-deserted public swimming pool?

At a superficial level, I enjoyed The Collector well enough that I might be tempted to pick up further volumes in the Marion Spicer series. But I was also aware of its glaring flaws, most notably its lack of convincing characterization. Only two of the characters portrayed come across as real people, and unfortunately one of them isn’t our heroine, Marion herself. The two who do are the art-specialist cop Didier Combes and Magni’s now-decrepit mistress, Jacqueline de Romarel — in movie terms, they have merely a supporting role and a cameo, respectively.

There’s a surprisingly raunchy (extended) passage around the halfway mark that at the time seems completely gratuitous, although later on we discover — and full credit to the author for this flummoxing of our expectations — that it does actually have a plot function.

The plot itself hangs together . . . sort of. We discover Magni’s intentions and who committed not just those two murders but, it seems, others. Yet, while Combes does do some actual detection, Marion seems to rely less on deduction than on being deflected hither and thither in response to bits of unevaluated information other people give her. It’s to be hoped she’s a bit more rigorous in her investigations of dubious artworks!

I do wish I’d liked this book a bit more. Generally speaking, I enjoy mysteries, I enjoy novels set in the art world or involving art forgery, and I enjoy reading French fiction in translation (and, no coincidence, the novel’s publisher, Le French Book, is a favorite of mine), so really The Collector should have knocked me sideways. Instead it elicited only this rather lukewarm response. Perhaps I really ought to try the second volume in the hope that things look up a bit.