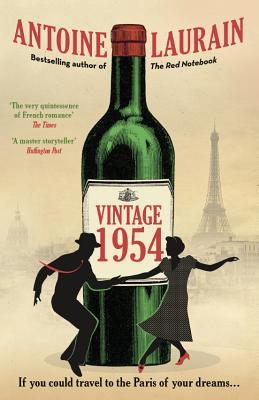 I very much enjoyed Laurain’s The Red Notebook when I read it last year. I have a few reservations about Vintage 1954, his latest, but, overall, the good things outbalance the not so good ones.

Three people save Parisian realtor Hubert after he’s been locked in the cellar of his apartment building by burglars: Goth restorer Magalie/Abby, barman Julien, both of whom live in Hubert’s building, and Harley Davidson fan Bob, who’s a newly arrived Airbnb tenant there from Milwaukee. Impulsively Hubert invites the three to share with him the bottle of 1954 Chateau Saint-Antoine he found in the cellar, and the next morning the quartet discover they’ve been transported back in time to 1954 Paris.

It must have been the bottle of wine to blame, they concur. 1954 was a particularly good year for the Chateau Saint-Antoine grapes. Could this have been because it was in that year that the vineyard was the site of a spectacular UFO sighting? Are UFOs time machines rather than spaceships (an idea that may seem outre but in fact one that Laurain’s borrowed from the UFO literature)? Did the UFO somehow infuse the grapes, and hence the wine, with the ability to transport people (and dogs) through time?

As you’ll guess, although this is a time-travel fantasy it’s less science fiction than whimsy. We’re not for one moment expected to believe the rationale for the plot, just to sit back and enjoy the ride.

Which for the most part I did — very much. I liked accompanying our characters as they discovered and tried to fit in with mid-1950s Paris, where everyone smokes like chimneys, talks wistfully or loathingly of de Gaulle, relishes fresh fish, and, often enough, knocks back a stiff drink for breakfast. What I enjoyed far less was that Hubert and his pals kept running into, just by chance, various celebrities of the era: Jean Gabin, Salvador Dali, Audrey Hepburn, Edith Piaf . . . It was a self-indulgence that got old pretty damn’ fast.

What makes it seem especially irksome is that the inventedperipheral characters whom our heroes meet are so very much more interesting than the cameoed celebs: Hubert’s gay great-uncle (I think) Leonard, whom everyone thought had gone off to make his fortune in Chile but who in fact set up as a hairdresser with his boyfriend; astronomer Professor Arpajon, whose not-yet-written book Alien Visits and Space Phenomena will bring him academic excoriation but become a cult classic in UFO circles; and so on. If Laurain can create such vivid (albeit consciously stereotyped) characters as these and indeed our main protagonists, why bother with the lazy option of introducing celebrities: Jean Gabin, silver-haired and stony-faced; Audrey Hepburn, smiles sweetly; and so on?

There are odd slips in the telling. I’m pretty certain Abby and Julien enjoy their first kiss on two separate occasions. And then there’s this:

. . . Julien went on. “When the flying saucer flew over, it changed the Saint-Antoine wine and since then whoever drinks it will go back to 1954. It’s been proven by an eminent scientist.”

It’s been made clear that Chateau Saint-Antoine is not a major appellation. Even so, surely hundreds if not thousands of people must have partaken of the 1954 vintage, especially since it’s renowned as being remarkably good. Have they allbeen transported back in time to 1954? Wouldn’t someone in 1954 have noticed by now that so many “lunatics” told the same story?

So much for my reservations. Overall, though, I was very much entertained by the whimsy — not to mention the jokes, which quite frequently had me laughing aloud. The translation, by Jane Aitken and Emily Boyce, provides just the right light, frothy touch. A thoroughly charming piece of work.