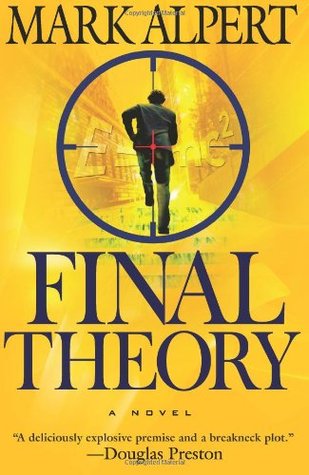 On the face of it, this has all the elements of what should have been a thriller tailor-made for me. Unfortunately, the plotting and the telling are a bit Dan Brown so that I came away from the novel sighing about missed opportunities.

History records that Einstein spent the last decades of his life in a fruitless search for the Grand Universal Theory (GUT) or Theory of Everything. The immediate incentive was to find a unity between General Relativity and Quantum Theory, both of which work exceptionally well at describing the universe on, respectively, the macro and the micro scales, but which are mutually incompatible. The aim beyond that was to explain the forces of the universe — gravity, electromagnetism, the strong and weak nuclear forces — in terms of a single, coherent theory. That theory would in effect explain the universe in its entirety — hence the grandiosity of its two most frequently used nicknames.

The premise of this novel is that Einstein’s search was not in fact fruitless. However, having derived the GUT, he realized that the knowledge it enshrined was dangerous: just in the same way that E = mc2 led to the atomic bomb, people could easily work out from the GUT how to create weapons (using wormholes and sterile neutrinos) that were capable of literally destroying the world.

So Einstein kept the GUT a secret. He did, however, give chunks of it to each of his trusted assistants, so that the knowledge would be preserved. Now, decades later, it seems a shady terrorist group is trying to get hold of the various bits of the theory through torturing the information out of the elderly assistants. The FBI has got wind of this, and is thus likewise hot on the trail of the GUT.

One of the assistants was the college mentor of history-of-science prof David Swift, and a cryptic deathbed message sets David off on an adventure to stop both the terrorists and the government getting hold of the GUT. En route he teams up with the red-hot (in both contexts) particle physicist he didn’t quite sleep with back in the day, Monique Reynolds, plus a ragbag of others, including an autistic kid who’s addicted to playing a shootemup on his Gameboy.

There are some good moments in all this — the final showdown at Fermilab is a lot of fun, and the caustic portrayals of various members of a certain US administration had me grinning on occasion — but there’s also quite a lot of cheese. For example, the strongest and most appealing character in the book, the physicist Monique, is black, and so she’s reflexively given a dire family background, a sister who’s a “crack whore,” and all the rest of a deluge of cliche. Elsewhere, time and again I’d read a passage and think, “Real people would never do that” — the Dan Brown effect, in other words.

The meaty bits of the science — the string-theory stuff about branes and sterile neutrinos (complete with natty little diagrams) — are a great deal of fun when they finally arrive, although until then I’d spent well over 200 pages wishing they’d bloody hurry up and do so. At a more basic level of science, the trope of David’s ability to quickly gizmo up a deus ex machina when required to do so by exigencies of plot, because he knows his elementary science and the bad guys don’t, becomes a bit tired.

Final Theory is, then, a moderately enjoyable thriller where I’d hoped for something a tad more. Perhaps it’s my expectations that were at fault rather than the book itself.