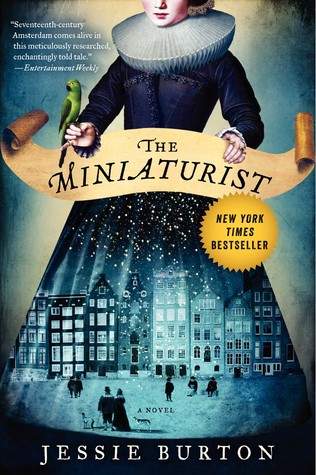 A few months ago I watched — and was very much taken by — the BBC miniseries based on this novel, so the next time I saw the latter for sale I snatched up a copy. On balance I enjoyed the novel, to which the TV adaptation is remarkably faithful (except, if memory serves, toward the very end), but I was rather less enthused by it than I’d expected to be.

Country girl Nella Oortman, of an esteemed but impoverished family, comes to Amsterdam as the wife of the far older Johannes Brandt, a merchant and entrepreneur. She finds a household that’s riven and full of secrets and a husband who shows little interest in her, especially at bedtime. He does, however, exhibit signs of friendship toward her, and buys her as a belated wedding gift a cabinet divided into nine furnished rooms, mimicking in miniature the rooms of the Brandt house.

In a local trade directory Nella locates a miniaturist, whom she commissions to make further furnishings and accoutrements for the “house.” Soon, though, as the affairs of the Brandts spiral into chaos and tragedy, the miniaturist begins sending Nella tiny artifacts she hasn’t asked for, artifacts that display an uncanny knowledge of the house and the family secrets and seem to predict the future . . .

It’s in many ways an engaging fantasy, although I think I’ve come across the germ of its premise more than once among old pulp-era science fiction and fantasy magazine stories. (That’s not intended as a criticism. Most story ideas have precursors; it’s what you do with the premise that matters.) The book’s probably a bit overlong, but most books are these days. The various main characters came across as real people, and the paranoia is well depicted of living in a city where religious bigotry can destroy a livelihood and indeed a life overnight on the whim of powerful people for whom everything’s a sin save their own small-minded hypocrisy.

Where I had more difficulty, however, was in the writing style. All too often when novels are written in the present tense I question the reasoning whereby this policy has been adopted — aside from the fact that it’s, like, trendy. This was one of those novels. Usually my irritation fades after a few pages, but in this instance it kept interrupting my enjoyment of Burton’s tale. I just itched for the story to have been written in the past tense.

Even leaving that aside, I had concerns about the telling itself, which featured (for me) far too many instances of the borderline twee. Here’s a sample:

Here she is a puppet, a vessel for others to pour her speech. (p94)

As Nella lowers her gaze to the people milling inside the church, her heart sends a hot thump of blood into her stomach. (p108)

In the first instance I’m not even sure what the sentence/image means. I can get the puppet bit, but the edifice of my comprehension comes tumbling down when I reach the pouring vessel.

Petronella Oortman was, as I discovered from the novel’s prelims and a furtive look at Wikipedia, a real person, and her cabinet dollhouse is on display at the Rijksmuseum. She did indeed marry Amsterdam merchant Johannes Brandt, but as a wealthy widow rather than the teenage virgin of the novel. I assume all the other details of their fictional lives are invented; really it’s not important one way or the other because this is first and foremost a novel. And it’s a novel that underpins its fantastication with some fragments of history rather than a historical novel.

Rather like Petronella Oortman’s house, The Miniaturist is a fascinating curio, and I’m very glad I’ve read it. But, as I say, there was too much that irked me about the telling for the novel to wholly endear itself to me.