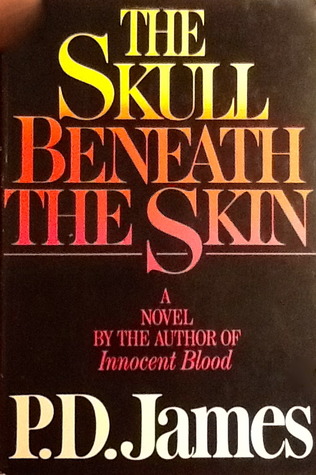 Cordelia Gray runs a detective agency whose main source of income is finding lost pets. However, she’s hired to accompany actress Clarissa Lisle for a weekend on the small island of Courcy, off the Dorset coast, for a vanity performance in the private theater there of The Duchess of Malfi.

The fading actress has for years been receiving anonymous notes that read a bit like death threats. No one suspects her life might be in danger — in fact, there’s suspicion that the manipulative Clarissa might be sending the notes herself — but in due course she’s found murdered. Who among the collection of oddballs on the island for the performance could be the guilty party?

The setup’s hugely artificial, of course, with all sorts of unlikelihoods being invoked to make sure the cast of suspects is a limited one, but that didn’t bother me: it’s a frequent characteristic of classic mysteries. I was reminded of the setting in James’s much later novel, The Lighthouse : Combe Island, off the northern Cornish coast rather than the southern Dorset coast, but near enough.

I was reminded of The Lighthouse in other ways, too, most of them not good. Lemme explain. Many years ago I read a couple of James’s early novels, was pretty bored by them, and gave up on her. More recently I tried two or three of her later novels, which tend to be considerably longer (why is this so often the case with modern mystery writers?), and was bored by them too: they tend to be grossly overwritten, drearily pompous . . . and, besides, I can’t stand the ghastly poet-copper-aristocrat Adam Dalgliesh, even though he’s basically a rehash of Ngaio Marsh’s Roderick Alleyn, whose company I quite enjoy.

So recently, looking at the shelves and spotting I had a couple of James’s early novels still unread, I thought it might be a good idea to give her another try — after all, my tastes have changed over the decades and I might enjoy now what bored me then. And these were a lot shorter than slabs like The Lighthouse and The Murder Room.

But, oh boy, was my optimism misplaced. All the same obnoxious self-importance was here, too, even at this relatively early stage in James’s career. The opening chapter’s quite jolly, but then we have a hundred or so pages of abject dreariness, during which James shows off her penchant for description — or over-description. When a box of Victorian toys is mentioned (lost the page number) we have to have ten or twelve lines itemizing its contents — details that are of zero interest to the plot or, for that matter, this reader. The bloodless Cordelia wears a guernsey, because that’s posher than her wearing a jersey. When Cordelia arrives in the guest bedroom she’s been allocated, its fixtures and fittings are described at such tedious length that I was well on the way to throwing the book at the wall.

But then at last the description of the bedroom ended. Phew! Lucky escape, wall! Except then the text moved on to describe Cordelia’s private bathroom at similar excruciating length . . .

For a couple of score pages after the discovery of the murder, James remembers what the art of storytelling is supposed to be all about, and my spirits temporarily rose. But it wasn’t to last. Back into the swamp I dove (there’s even a couple of paragraphs about bloody Adam Dalgliesh[*]) until finally I reached the protracted action sequence that serves as the book’s grand climax — and, while this lasted, I was romping through the pages. Clearly the author could do the stuff when she wanted to; why on earth did she spend so much of her writing time not doing it?

So much for my being quick.

All in all, then, you’ll not be surprised to learn that The Skull Beneath the Skin is headed for a library sale, as are the other P.D. James books from my shelves. I know lots of readers hold the author in high regard, and I’m sure her work has sterling qualities that somehow I’m missing, but my shelves are bulging with books I want to read. So . . .