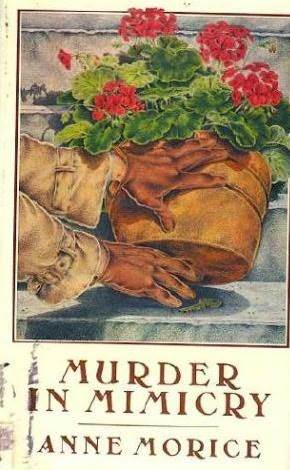 A mystery that’s tremendous fun to read even if, as a mystery, it’s not the greatest of shakes.

Actress Tessa Crichton, Morice’s series detective, is recruited for the US run of a stage comedy that’s been a big hit in London’s West End, and accordingly travels to Washington DC. There she finds the production riven by old dislikes and feuds, with the various cast members and crew bitching amusingly at each other. (From my limited knowledge of the theater, this all seems very realistic — quite nostalgic I got, dearie.) But then the old friend whom Tessa is lodging with gets hit over the head by an intruder and, just as Tessa’s getting over that, a cast member is murdered in a darkened street. Enter Inspector Meek of the DC police department; between them he and Tessa wrap up the case, but not before Tessa finds herself threatened by a ruthless killer . . .

The bitchery among the thespians is one source of the sustained amusement. I was also much tickled by the affectionate snarkiness of the many very English observations about the curious ways of the colonials. I laughed aloud at the characters’ duels with the WALK/DON’T WALK lights every time they had to cross a road, the cast-members’ fear of the skyrocketing (by UK standards) street violence rates, and the challenge of locating a post office that could be persuaded to stay in the same place two days running. Four decades after the novel’s publication, people on the two sides of the Atlantic are far more familiar with each other’s ways and language, but I can recall reacting in much the same manner as Tessa and her cronies when, back in the early 1970s, I made my own first venture across the pond to New York.

The solution to the murder was one of those where I didn’t especially see it coming but wasn’t much surprised by it when it did. That detracted hardly at all from my enjoyment; this book’s strength is as a fun read, its ambitions no higher than to entertain for a couple of hours.