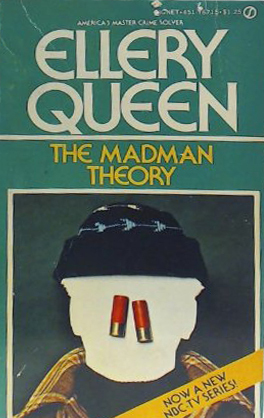 Well, it was short.

Five men go for a backpacking trek in General Grant National Park, California. A couple of days out, one of them has his head blown off by a double shotgun blast from the bushes. When the rest pluck up the courage to investigate, they find the shotgun has vanished — presumably carried off by the fleeing killer — and there’s no shred of evidence left aside from the marks on the branch where the shotgun rested.

The men had noticed another hiker following the same route as theirs, but thought little of it. Could it have been someone stalking them with murderous intent? Could there be a psychopath — the madman of the title — hunting random trekkers amid the wilderness of the National Park?

Call for Inspector Omar Collins of the Fresno PD. As his investigations take him into the world of bars/music clubs, further murders occur that he knows must be related to the one in the park. The Madman Theory becomes less and less plausible. But who could have wanted the victim — a wealthy and philanthropic pharmaceutical entrepreneur — to die when everyone around him seemed to benefit from his being alive?

Despite the author’s best efforts, there’s not a lot of mystery in the whodunnit aspect of this tale, unless you subscribe to the notion that in mystery novels it’s never the most obvious suspect who’s the culprit.

The howdunnit is a bit more of a puzzle. The only trouble is that, when it’s explained, the solution’s just rank silly. I’ll explain my thinking on this below, behind a Mystical Blue Spoiler Curtain. (Ooo, the technology!)

Jack Vance, who ghosted this novel under what was by then essentially the house-name of Ellery Queen, is of course better known by far for his science fantasy. I confess I’ve never been a huge enthusiast for his work because of the (for me) overfloridity of his prose. Here, though, as Omar Collins plodded through what’s essentially a police procedural, I found myself yearning for some of that floweriness of language — perhaps as much as the “real” Ellery Queen might have applied. It’s not that the prose is drab, but . . . on second thoughts, it is that the prose is drab. That and the fact that the characterization is pretty minimal made me feel as grimly dogged in my reading as Collins is in his investigation.

So, not one I can get excited about. I’m still interested, though, in the novels produced by other hands during this late phase of Ellery Queenery, and will persevere.

SPOILER STUFF: The mysterious follower is a red herring set up by the murderer. The shotgun was rigged with a Heath Robinson/Rube Goldberg-style arrangement of cords and clothespegs to shoot the victim and whip the weapon itself down a long, steep slope. Aside from the fact that the reason murderers don’t do this sort of thing in real life is that such bonkers devices almost certainly won’t work (what are the chances of their missing the target? will the intended victim stand in exactly the right spot? how do you get the timing just right? and so on), it’s here assumed that the cops won’t bother going down that steep slope to look for the shotgun. After all, although it’s possible the killer could have scurried off with it, any cop would look at the situation and assume there was a high chance the shooter, having done the deed, would simply hurl the weapon down the slope to get rid of the encumbrance as he fled. That the cops don’t go and have a look down the slope as a matter of routine during their investigation of the murder scene just simply isn’t plausible. Harrumph.

7 thoughts on “book: The Madman Theory (1966) by Jack Vance, writing as Ellery Queen”