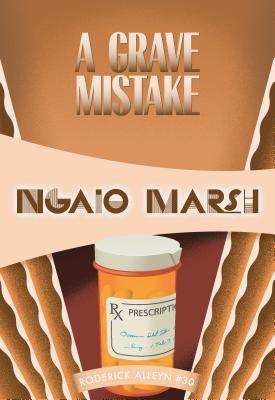 A couple of days ago I was reading a critique of Marsh’s novel Last Ditch (1977) that pulled the book apart on a whole bunch of grounds, with most of which I agreed: it’s indeed pretty dire. But when the reviewer then said that all of Marsh’s last few books were “atrocious” I had to demur. Grave Mistake, which I’d finished reading literally hours before coincidentally stumbling across the review in question, kept me thoroughly entertained from first page to last and yet was published the year after Last Ditch. In terms of pure puzzle, it doesn’t rank especially highly, but in every other respect it’s a very fine detective novel.

Verity Preston, a respectable spinster with a past that was wilder than people might now think, is our primary viewpoint character here; I’ve no idea if Verity is intended as a sort of Ngaio Marsh surrogate, but it certainly feels that way. She’s not entirely a passive character, but she’s settled in her existence as an observer rather than a mover and shaker. What she observes are the goings on in the village of Upper Quintern and its environs.

And what has just gone on is that Verity’s oldest — if not closest — friend Sophie Foster has died while staying at a rest-cure hotel to recover from her latest bout of hypochondria. All the signs are that Sophie committed suicide, but everyone who knew her doubts this: not only was she not the type, she had every reason to live. Moreover, she recently made a bizarre will leaving most of her fortune to the doctor who’d been treating her at the hotel — whom she’d known for only a matter of weeks but who happens to be the man with whom Verity, decades ago, committed most of her wildness.

Soon Roderick Alleyn, Marsh’s series detective, is called in to investigate alongside his long-time sidekick Fox.

Mostly because Sophie was so heavingly rich, there are lots of people with motives for offing her. Her stepson by her first marriage, Claude, wants her money. The local millionaire, Nikolas Markos, wants her architectural treasure of a house rather than his own ugly pile and, now that she’s dead, will be able to live in it after his son Gideon marries Sophie’s daughter Prunella. Prunella and Gideon gain from Sophie’s shuffling off of the mortal coil because now there’s less impediment to their marriage plans, which Sophie had seemed intent on thwarting. The doctor, as noted, is scheduled to inherit the bulk of Sophie’s money, and there are lesser, but non-negligible, bequests to others.

Just to add an extra motive for all concerned, Sophie’s first husband, killed long ago in the war, took with him to the grave the secret of the whereabouts of the Black Alexander, a fabulously valuable one-of-a-kind postage stamp.

As I say, motives everywhere. It’s through dazzling us with motives that Marsh most effectively deceives us.

Although we tend to think of Marsh as one of the four Queens of Golden Age Crime — the others being Sayers, Allingham and Christie — it’s easy to forget that she was the funniest of them. Allingham could be very funny too and Christie had her moments pretty frequently, but for sheer sustained mirth in a detective novel Marsh took some beating.

As I was reading Grave Mistake (retitled, I think unfortunately, A Grave Mistake in many editions) it occurred to me that her comedic secret lay not so much in the jokes and bits of situational humor — although there are plenty of those — as in her detail writing, especially her use of unorthodox adjectives.

To take just a single example, at one point we’re told that an important pick-me-up at any police station is a cup of strong tea and a couple of recalcitrant biscuits (cookies).

What a lovely term: “recalcitrant biscuits.” I can see them now, sitting all woebegone on their chipped white china plate.

As I was reading Grave Mistake a lot of it felt a tad familiar. I assumed I must have read the book decades ago, during the period when I romped through great swathes of GAD, including many of Marsh’s novels. Yet I had no idea about who the killer was nor the location of the Black Alexander, both of which are quite striking aspects of the book. Furthermore, every now and then I was remembering something visually; a particular example concerns the village idiot’s habit of camping inside the graveyard hedge and, from the nest he’s made himself in there, scaring unwary passers-by. Yet, as shown by a quick rummage in IMDB, Grave Mistake wasn’t the basis for any of the episodes in the short-lived Roderick Alleyn TV series way back when and doesn’t seem to have been adapted for the screen otherwise. I’m wondering if the novel might have been cannibalized at some point for some completely unrelated series — Midsomer Murder, summat like that. But who knows?