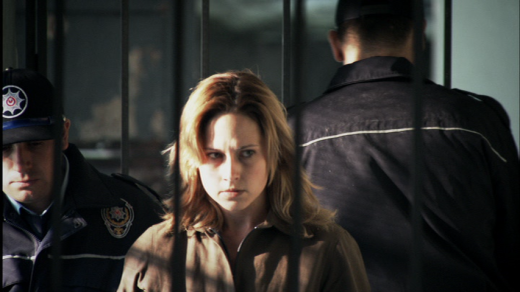 Portrayed as a sequel to, or at least a companion work to, the commercially very successful theatrical feature The NET (1995) dir Irwin Winkler—with Sandra Bullock as computer expert Angela Bennett and Jeremy Northam as her murderous foe, Jack Devlin—this is really more of a sister to the TV series derived from that movie, The Net (single season of 22 episodes, 1998–9), created by Rob Cowan, Deborah Pratt and Irwin Winkler, in which a cyberterrorist organization, the Praetorians, strips computer programmer Angela Bennett (Brooke Langton) of her identity and sends her on the lam as an accused criminal. It makes most sense, however, to view The Net 2.0 as a standalone thriller with some genuinely neonoirish twistiness of plot: you can never really be sure people are who they say they are, or which side they’re on.

Whiz US cybersecurity expert Hope Cassidy (DeLoach) is approached out of the blue with the offer of a dream job in Istanbul. Boyfriend James Haven (Hopkins) is reluctant to make the move, so tearfully she leaves him behind.

During the flight she’s befriended by stewardess Roxelena (Dönmez), who gives her a traditional bracelet, and on landing by gypsy-cab driver Osman (Kiraç), who runs her around the city with seemingly little thought for recompense. Another friend she makes, during a fire alarm at the hotel where they’re both staying, is fellow-American Z.Z. (Tracy).

It’s soon evident there’s something horribly wrong with the whole setup, and before Hope really knows it she’s on the run from Russian arms dealers, the cops and anyone who’s seen one of the WANTED posters or newspaper photos showing her face and the name Kelly Roos—the new moniker she’s been given by the gang who’ve stolen her identity and replaced her, in real life, with Z.Z.

We’re told most of the story in the form of flashbacks from the interrogation conducted in the police cells by police psychiatrist Carlotta Kavak (Akbag) as Hope awaits her preliminary hearing. In fact, our introduction to the tale takes the form of the dramatic chase leading up to Hope’s capture by the cops.

Direct-to-DVD sequels to successful movies don’t have the best of track records—there’s usually good reason why the franchise’s new efflorescence isn’t happening in cinemas nationwide—but I found myself surprisingly taken by The Net 2.0. Nikki DeLoach makes a very appealing heroine, in a sort of Hallmark Original Movie way, and she’s more than ably supported by some fine Turkish actors in Demet Akbag, Sebnem Dönmez and perhaps especially Güven Kiraç as the genial cabbie, Osman.

The various plot elements won’t always sustain too much thought: For example, how come Hope never questions why Osman is prepared to abandon the job that earns him his daily crust in order to serve her? And how can she seemingly always have plenty of money on hand when her bank account’s been cleaned out and, according to her own telling, all she has are the few dollars she converted at the airport back in the US before boarding? And, above all, how is it so easy to penetrate the security of a hi-tech Russian commercial bank? And why make a physical incursion anyway when, as a cyber expert, it’d presumably be easier to hack your way in?

But the direction, staging and pacing are exuberant enough that they carry all quibbles before them.

Fans of classic detective fiction will smile at the moniker Kelly Roos: Kelley Roos was the joint nom de plume of husband-and-wife writing team Audrey and William Roos, renowned for novels including the Jeff and Haila Troy comic mysteries—one of which was filmed uproariously as A Night to Remember (1942).