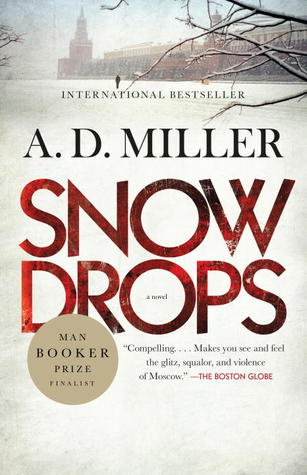 English lawyer Nick Platt, working in Moscow during the early years of this century as a facilitator for western bank loans to dubious Russian projects, rather thrives in the cutthroat, amoral society he finds there.

One day he encounters two sisters, Masha and Katya, and soon convinces himself he has fallen in love with Masha. Almost immediately they’re in the throes of an affair, with Katya as the close friend who seems always in tow. When the two young women suggest Nick should help their elderly aunt with the sale of her Moscow apartment and the purchase of a new one out in the suburbs, it seems only too natural to him that he should do so: Masha’s family will perhaps soon be his family, too. But, as we realize from almost the opening line of this novel, and as Nick seems to as well, he’s being played by Masha and Katya every bit as much as his firm is being played by a rogue operator universally referred to as the Cossack, whose oil-terminal project in the far north will surely, surely, surely bring the banks major returns on their investments . . .

One of the many accolades on the cover and in the prelims of my edition of this novel compares it to the work of Graham Greene, and the comparison is an apt one in terms of overall feel: they’re working in the same territory, so to speak. That’s not to say Snowdrops is up there with the best of Greene: at least in this, his debut novel, Miller’s prose and narrative drive are no match for the old master’s. But there’s that same sense of the Englishman a long way from home thinking he understands a foreign culture far better than perhaps he does, being an outsider who’s not fully aware of his outsiderness, and stumbling as a result.

Nick, who narrates in the first person — the book takes the form of a confession, some years later, to his current fiancee — is such an obnoxious, shallow character that it’s hard to know how I willingly endured his company for the stretch of an entire book: I was halfway to siding with the criminal sisters as they set about exploiting him and ripping him off. Yet it’s testimony to Miller’s skill that, not only did I endure Nick, I became quite addicted to his voice, and felt a definite regret when the end of the book came and I had to leave him. By the time I reached there. it seemed obvious that, despite all his protestations to his bride-to-be, Nick hadn’t really changed all that much.

Where the book really scores is in its depiction of the Moscow of its era. I have no way of telling if this depiction is accurate; on the other hand, the author spent some while there as a correspondent for the Economist, so I imagine it’s at least close to the reality. Miller succeeds admirably in conjuring up a paranoid, claustrophobic atmosphere: society is dominated by sociopaths, everyone’s a predator, everyone’s on the take, everyone’s out to rip you off, human life is so cheap and human suffering so accepted that you can’t rely on the mercy of others to bail you out if anything goes horrendously wrong. Nick is a happy swimmer in these waters, the smallest and most ineffectual of sharks; when a neighbor asks his help in locating a missing friend, he does the absolute minimum and then habitually avoids the man. In the context of new-century Moscow, that seems almost benevolence.

I’m a bit surprised that Snowdrop was shortlisted for the Booker since, although I enjoyed it, it doesn’t seem to me to be a work of extraordinary ambition, which is surely what the Booker judges ought to be looking out for. On the other hand, several of the Booker nominees I’ve read over the years have seemed like complete stinkers to me, so perhaps I ought to be relieved to find one I liked!