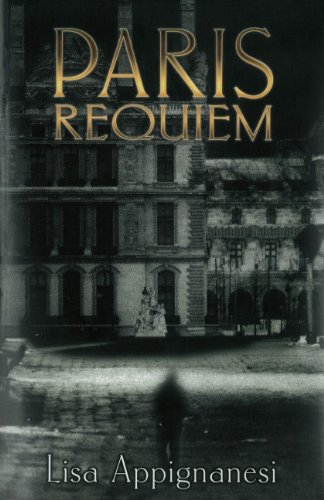 It’s 1899 and Paris is readying itself for the Exposition Universelle of that year. Widowed lawyer James Norton arrives from Boston with strict instructions from his mother to extract his younger brother Raf from a potentially disastrous liaison with a — gasp! — Jewish actress, Olympe Fabre (the former Rachel Arnhem), and to bring both Raf and disabled sister Ellie back home to her. But James soon finds himself caught up in fin de siecle Paris as the two brothers, alongside Inspector Durand of the Paris Police Prefecture and the enigmatic aristocrat Marguerite de Landois, investigate the murder of Olympe and other Jewish women. With the Dreyfuss affair very much in the public attention, passions — both antisemitic and liberal — are rising high in the city as the investigation exposes the seamier elements of Parisian life: prostitution, sex trafficking, exploitation of the weak and feeble-minded, antisemitism, murder . . .

Appignanesi succeeded in plunging me entirely into the Paris that James discovers, so that I became entirely absorbed in this world — one of which I’d known virtually nothing before. The plot itself moves at its own stately pace until the latter stages; I found this deliberateness added to the absorption. Although that plot is fairly complex, with ramifications galore, the mystery aspect of it is relatively simple: despite a full quota of red-herring suspicions, it’s not hard to spot who murdered Olympe, and the motives for it. But that didn’t overly bother me: I was enjoying the characters, their interactions and the flow of the story far too much.

That said, there were far too many examples of sloppiness at the level a good copyeditor should have been picking up. There were numerous missing question marks and occasional plurals rendered with apostrophes (“the Elliott’s”), while the use of commas could be most charitably described as scattershot. Beyond the bare mechanics, though, there were lots of places where the author seemed to be coasting — drawing upon previously used bits of description or characterization, for example — and not infrequently I came across a sentence or paragraph that seemed to be very first draft. (As an aside, the edition I read, the first McArthur paperback issue, is printed on alarmingly stiff paper — almost thin card. It’s a fat book, and so my wrists and fingers literally grew weary holding the damn’ thing open.)

Paris Requiem stimulated the same part of my reading mind as books I’ve read by authors like Joseph Karon and Caleb Carr, although it’s got more intellectual heft than the latter and is less suffused by worthiness than the former. Another author whom it recalled is Charles Palliser, and maybe that’s a better comparison. I’m really quite keen to read more of Appignanesi’s work.