|
“And don’t forget: make one silly mistake and she won’t be working with you any more!”
|

Robert Chapman, author of this movie’s source novel, was a Fleet Street journalist and columnist—in fact, I vaguely recollect bringing him a cup of tea when, as a schoolboy in the 1960s, I worked a vacation job as a messenger at Fleet Street’s Daily Express. I tried one of his detective novels some while later and found it pretty mediocre, so experimented no further. Four movies were based on his series of mysteries featuring investigative crime reporter Rex Banner (variously renamed in the screen adaptations); I covered two of them in my Comprehensive Encyclopedia of Film Noir:

It’s at this moment that I should say something like: “It was worth the wait.”

Note how the sensationalist poster draws as little attention as possible to the movie’s “U” certificate.

Rex Banner (Reynolds) is running a freelance reporting agency with his wife Maxine (Blackman) née Hamilton as journalistic partner. One evening he gets a phonecall from an old contact, Gospel Joe (uncredited), telling him to come visit, because Gospel Joe has a juicy bit of info for him. 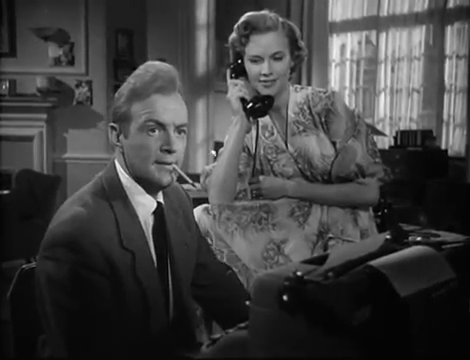 On reaching the old eccentric’s dingy flat, however, Rex finds the man dead on the floor, his skull caved in by an iron bar. In his mitt Joe clutches a news clipping about the audacious theft, a few months ago, of the Delavine jewels. Naturally Rex concludes that Joe was murdered for what he knew about the burglary.

Rex (Peter Reynolds) arrives for his rendezvous with Gospel Joe.

Just then Inspector Johnson (Neil) of the Yard arrives, having been tipped off by an anonymous phonecall that Rex would be here with a corpse. It’s obvious someone’s trying to frame Rex for the murder—so obvious, in fact, that Johnson just makes threatening noises about Rex being a suspect rather than taking Rex in.

This is a story by a journalist with a journalist as its hero, so it’s obvious what happens next. After fixing up with Mac (Kelso), editor of the Comet, that the paper will have first dibs on the story, Rex and Maxine use their investigative skills to solve the murder and the jewel heist and to scoop Fleet Street while the cops just bumble around.

Well, that’s sort of what happens, except that Maxine, bizarrely, plays virtually no part in the investigation, instead gadding off to have drinks and meals with this guy she’s just met, Peter Florian (Jackson).

Peter “Just Call Me A Good Friend” Florian (Gordon Jackson) — is he seeing rather too much of the toothsome Maxine?

It’s left to Rex and photographer Sammy (Balfour) to do almost all the heavy lifting. Why on earth one would employ an actress with all the strength and presence of Honor Blackman and then give her a part that demands little more of her than to flutter girlishly at appropriate moments is far more of a mystery than anything else in the movie. At one point a villain says to Rex,

“And don’t forget: make one silly mistake and she won’t be working with you any more,”

and we can only stare at the screen, because basically Maxine hasn’t been working with Rex anyway.

A most improbable coincidence leads the journalist to the gem dealer Julius Meyerling (Swanwick), whom he instantly suspects of having been approached by the Delavine thieves as a potential fence. Meyerling denies the suggestion forcefully, but his sultry wife Lola (Vernon) seems to have more to tell—enough that Rex agrees to meet her later. He also interviews Willie Summit (Main), a journalist on the Comet’s rival, the Gazette, who seems to have already dug up a great deal on the story, and Mrs. Halloran (Turner), a widow whose late husband Tony may have been in on the jewel theft. 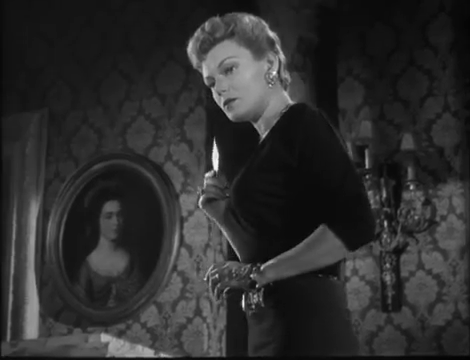 The trail leads Rex to a farmstead in Ashdown Forest, about thirty miles outside London, where deaf Fred Bissett (Daly) and his unnamed wife (Johnson) live as tenants. It is here that the gems are hidden, and here that the murderer is unmasked . . .

If you don’t mind the fact that the plot doesn’t really make sense and some of Rex’s deductions, while of course they prove correct, seem to be pulled more or less from thin air, The Delavine Affair is reasonable enough entertainment, albeit at the unambitious end of the scale even for a churned-out mid-1950s UK support cheapie.

Its real draw today is its cast. Honor Blackman a few years later earned what would become worldwide fame as Cathy Gale in the TV series The Avengers (1962–4) and then as Pussy Galore in Goldfinger (1964); she seems still to be occasionally at work as an actress. The amazingly prolific Gordon Jackson is probably best remembered for his TV work as the butler Hudson in Upstairs, Downstairs (1971–5) and as secret service boss George Cowley in The Professionals (1977–83); he’s a bit of a favorite actor here at Noirish Towers. Michael Balfour was one of those stalwarts of UK stage and screen whose face became immediately recognizable. Last but hardly least, not so long after The Delavine Affair Katie Johnson went on to achieve immortality as the sweet old widow Mrs. Wilberforce in The LADYKILLERS (1955).

Peter Reynolds’s story is a sadder one. All through The Delavine Affair there are . . . well, not jokes, exactly, but quips to the effect that the natural state of human beings is to be smokers—at one point I suspected there was some active product placement by cigarette company John Player going on. In this context it seems a slice of bitter irony that Reynolds died at the age of just 48 in a tragic domestic fire thought to have been caused by his falling asleep while smoking a cigarette. 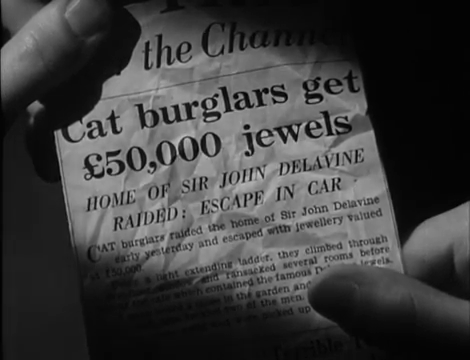