Identical twins, one a sweet young widow and the other a sexpot stripper, and the fortune that only one of them wants! 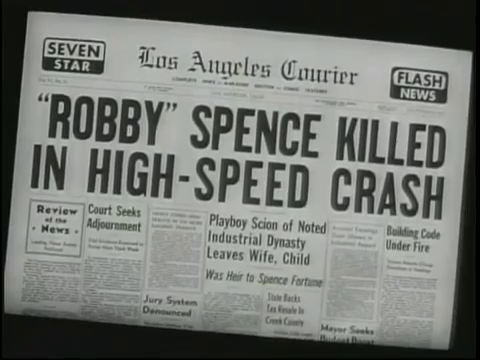 Racecar driver Robby Spence dies in a spectacular crash. A month later, unsuccessful California lawyer Preston “Pres” Morgan (Hill) is recruited for a mysterious task by highly successful corporate attorney Thorne Fletcher (Lummis), acting on behalf of the mighty Spence Industries—or, more accurately, for that company’s steely owner, Leonora Spence (Tedrow). Leonora was appalled when, a few years ago, her late son Robby married Sabena Corwen (Henderson), one half of the dancing act The Corwen Sisters, the other half being Sabena’s identical twin sister Dara (Henderson again). The irate mother cut her son off without a penny. Now she wants to take her grandson, Billy (Oliphant), from Sabena and raise him herself as future CEO of Spence Industries. Pres’s task is to take a contract to Acapulco, where Sabena and Billy live, offering the mother $500,000 to relinquish all rights in the child. 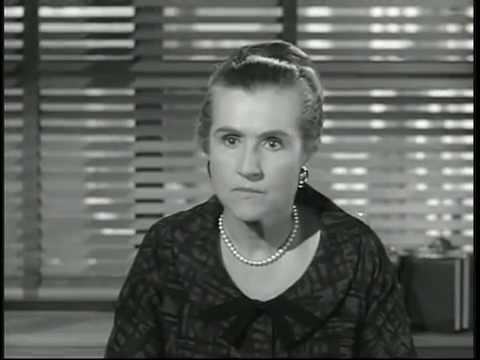 There’s a quite effective scene in which Pres, his righteous indignation roused, tells Leonora firmly what she can do with her offer of employment, that he would never stoop so low as to collaborate in what he sees as the buying and selling of an infant . . . then discovers that his fee for the service will be $50,000.

Arrived in Acapulco, Pres goes to Sabena’s home. There he meets not just Sabena but twin sister Dara and Dara’s husband Jay Flagg (Lowery). There he marvels over the fact that the two sisters are not just beautiful but so very identical except that Sabena has shortish brunette hair while Dara has longer blonde hair. He soon notices, too, that there are behavioral differences between the rather prim Sabena and the clumsily vamping Dara. 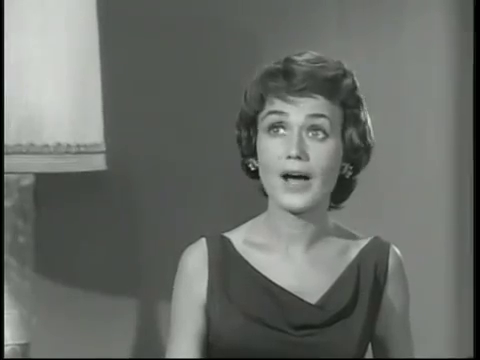 Sabena refuses Leonora’s contract point-blank—no way is she going to give up her son—and throws him out of the house.

This is to the huge displeasure of Jay and Dara, who desperately need the money. After the breakup of The Corwen Sisters, Dara struggled along on her own as best she could, which wasn’t all that well because Sabena was the brighter and more talented one. Dara married Jay not because of any love for him but because he was the only guy chasing her favors who “didn’t smell of cheap whiskey.” Now she’s reduced to being headline “dancer” in Jay’s strip club . . . except that the club went bankrupt a few weeks ago, so who knows where next her career path might lead her?

Dara expresses all this to her sister in another effective scene. In fact it’s a great feature of this very serviceable screenplay that Dara’s allowed to present her argument and her side of the story in full, and not unsympathetically. True, it’s largely Dara’s own fault that she’s gotten herself into her current mess, but at the same time Sabena really is ignoring the fact that Dara’s life is and has been pretty rotten.

It’s not just Sabena who wants Pres to clear off. Later, at his hotel, Pres is attacked by Sabena’s fiercely loyal gardener and general factotum Manuel López (Renard). The cops haul Manuel off for a night in the cooler, even though Pres makes it clear to Lieutenant Reyes (Romero) that he doesn’t want to press charges. The thing is that Pres really agrees with Sabena: despite the lure of the $50,000, he’d in many ways much rather that mother and child weren’t separated, and he admires her for her refusal to submit. Not to mention that he’s fast falling for her. 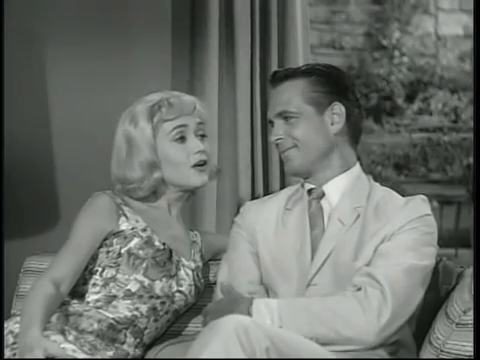 It takes exactly zero ratiocinative skills to work out the rest of the plot far more swiftly than Pres seems able to. Yes, Dara dons a wig to deceive Pres into believing that Sabena has changed her mind and, as Sabena, signs the papers. Yes, Jay rigs Sabena’s car so that, as she drives along a high coastal road, she’s sure to go over the edge. And, yes, the bad guys fail to get away with it. There’s a final twist that’s a tad less predictable, but only a tad.

No prizes for guessing that Pres (Craig Hill) is falling for Sabena (Marcia Henderson).

Henderson has no great screen presence, but she manages the dual role quite well, giving Sabena the look of motherly domesticity and Dara a definite, not overacted flooziness. This was her last appearance on the big screen; she’d been suffering from rheumatoid arthritis since 1957, and it’s to her great credit that she manages to make Dara as slinky as she does. An actress of some minor but not insignificant note on the stage, she died relatively young (57) of lupus. 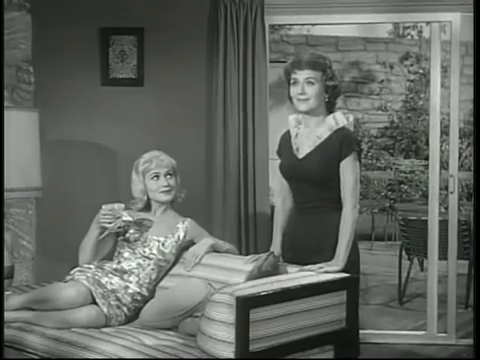 One of the rare shots showing both sisters (Marcia Henderson x 2) face-on.

Hill, as Pres, is likewise somewhat bereft of screen presence here. He was, of course, renowned for the role of P.T. Moore in the TV series Whirlybirds (111 episodes, 1957–60), and his screen career was a remarkably long one, his last outing being Platillos Volantes (2003), a Spanish UFO drama where he was well down the cast list. Thanks to the Whirlybirds connection, one might have expected him to have attained far more prominence than he did; a watching of Deadly Duo makes it quite clear why he didn’t. A noir outing of his—again with him fairly low on the cast list—was DETECTIVE STORY (1951).

Avil’s cinematography has about as much flair as that for a soap opera; it’s competent, but the best one can say about it is that it’s unobtrusive.

Richard Jessup was primarily a writer of Westerns, although he ventured sporadically into crime fiction. He also wrote a number of screenplays. A movie of some slight noirish interest to be based on a Jessup novel, and with a Jessup screenplay, was The Young Don’t Cry (1957) dir Alfred L. Werker, with Sal Mineo, James Whitmore, J. Carrol Naish, Gene Lyons and Paul Carr.

The theme of identical twin sisters, one good and one evil, has (despite the insistence of Holmes that “It’s never twins!” in the New Year’s Day 2016 special Sherlock one-off episode The Abominable Bride) popped up occasionally in the history of noirish and psychological-thriller movies. Among those that I covered my Comprehensive Encyclopedia of Film Noir (plus one that, with hindsight, probably should have been there), along with the actresses who played the relevant dual roles, are:

In SLIGHTLY SCARLET (1956) the sisters in question (played by Rhonda Fleming and Arlene Dahl) are not in fact twins but are dressed and otherwise accoutered to make it look as if they are. Another riff on the twin-sisters theme, although something of an outlier, is Brian De Palma’s SISTERS (1973; vt Blood Sisters).

Among movies with a similar premise, but with the twins here being men rather than women, are NAZI AGENT (1942), with Conrad Veidt in the dual role, and HIT AND RUN (1957), where Hugo Haas plays both twins.