A jailbird on the run and a burlesque dancer meet treachery in the swampy vastness! 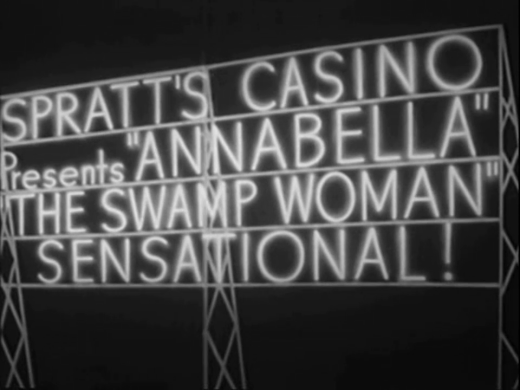 Our tale begins with a preamble that sets the scene:

“Nearly three hundred years ago, a proud and self-reliant people founded a community within the swampy vastness of the deep south. Today, the descendants of the founders maintain traditional independence, many even choosing to ignore the world beyond their barricade of swamp waters.”

Heading into this swampy vastness is a runaway convict, Jeff Carter (Deane), hotly pursued by a rifle-toting Detective-Lieutenant Rance (MacDonald), who wears a marshal’s star for reasons I can’t quite fathom, plus an unnamed guard (Hagney) and a pack of dogs that (presumably for budgetary reasons) we never see but just hear plaintively howling. Says Rance:

“There may be a hundred villages yonder, but if it takes from now ’til doomsday I’ll search them all to find Jeff Carter, and unless he makes a foolish move I’ll bring him in alive . . . but, dead or alive, I’ll bring him in.”

Jeff runs many a mile, swims a river, struggles through undergrowth and is just about dead on his feet when he at last reaches some human habitation, the cabin of sparky young bride-to-be Elizabeth “Lizbet” Tollington (Hull). She’s been told by local wise-woman Granny Grundy (Sturdevant) of a superstition that, should a young woman be trying on her wedding dress when she sees a man reflected in her mirror, that man will be the one she’ll marry. Sure enough, she sees Jeff in her mirror as he stumbles past the window behind her. She rushes out and saves him from the swamp into which he has just face-first fallen. The problem for her is that the dress she was trying on was given to her by the man who intends to marry her on Monday, moonshine-distiller Pierre Pertinax Pontineau Briand Broussicourt Olivier—or, to give him his everyday name, Pete Oliver (La Rue). (Was the “Olivier” a screenwriter’s in-joke? We shall never know.) 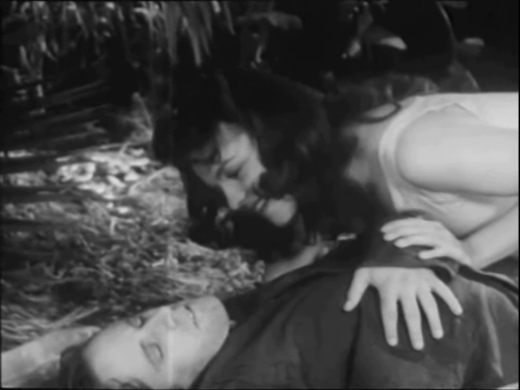 Hull, as Lizbet, seems to be trying to capture here something of what Judy Garland brought to The Wizard of Oz (1939). Lizbet is so coltishly, so girlishly, so enthusiastically pert and purdy and faux-hickly cute, skipping as she does like a schoolgirl an’ jus’ goshdurned tuckering it all out (I think that’s the term), that after about thirty seconds of her screen company it’s not unnatural to start yearning for booze, or earplugs, or just plain mercy. When she starts tweely calling Jeff “Mr. Man” it’s wise to have a brown paper bag to hand. Mind you, Pete soppily calls her “Little Pigeon” at every possible opportunity, so she’s not the only threat to intestinal fortitude.

There are two other newcomers to the swampy vastness. One is seedy promoter Flash Brand (Novello). Resented on sight by the locals as an outsider, he’s here in search of the other newcomer—or, rather, returnee—Annabelle Tollington (Corio), whom Flash maintains he found working as a taxi dancer in the big city and whose career he managed until she headlined as Annabella [sic] The Swamp Woman. Now she’s left the bright lights behind and, Flash has deduced, is on her way home to join her brother Jed (Gunn) and sister-in-law Mary (Austin). He’s here to rein her in.

Flash (Jay Novello) looks about as trustworthy as he in fact is.

The reason she’s coming home may well be to rekindle her relationship with that very same Pete Oliver who’s betrothed to her niece Lizbet. They do things differently in the vasty swampness.

Jeff was convicted of the murder of a certain Spratt (Adams), who ran a gambling joint. One night a losing Jeff got angry and told Sprat loudly that the house was rigged; later that night Spratt was found with his head busted in and the obvious conclusion was that it was Jeff what dunnit. 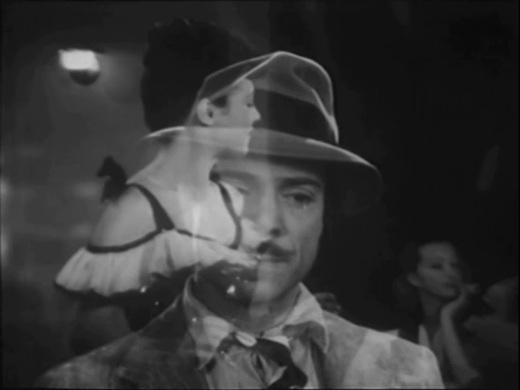 But—and brace yourself for a coincidence here—Pete Oliver’s sidekick Tod Appleby (Aubrey) was up in town that night delivering a consignment of hooch to Spratt. Tod may be blind but, to compensate, he has incredibly acute hearing and never forgets a voice. And he remembers a quite different voice emanating from Spratt’s office before the heinous deed was done.

Jeff is definitely a decent sort. Although he’s fallen as much in love with Lizbet as she has with him, he’s at pains to point out to her that, since there’s a law against aiding escaped convicts, the kindest thing he can do for her is to clear out. (“Mr. Man,” she responds. “You’d be kinder to me if you stayed.”) Later, after Rance has caught up with Jeff and is escorting him to justice, the cop gets his foot into one of Pete’s animal traps; rather than grab the opportunity to flee, Jeff struggles to get the clamp open and release the cop’s foot.

Pete—after having belted Jeff a few times for moving in on his woman—recognizes this decency and the fact that the youngsters are in love. Perhaps, too, he’s responding to Annabelle’s taunts that his intended is young enough to be his daughter; maybe, too, he’s galvanized by reminders of how good the good times with Annabelle used to be.

This is a pretty dreadful movie, to be honest, but it’s by no means boring and, in truth, I really quite enjoyed it; my occasional outbreaks of laughter were as affectionate as they were derisory. Overall, Cat on a Hot Tin Roof (1958) this ain’t, but there are moments when, particularly, La Rue and Corio improbably manage to create some dramatic tension, and even some heat. I say “improbably” because the success of La Rue’s attempts to portray the anguished depths of a tormented soul is perhaps best summarized in an exchange between Tod and Pete’s other sidekick, Abner Enderbarry (Wilkerson):

Corio was a genuine burlesque star, a hugely popular stripper in NYC before the administration of Mayor La Guardia clamped down on such naughtiness in 1939. She made five B-movies in the early 1940s, of which Swamp Woman was the first. Thereafter she concentrated on the stage as both performer and producer/director. She also cowrote with Joseph DiMona a book called This Was Burlesque: A Rollicking, Colorfully Illustrated History of Burlesque as Seen Through the Eyes of its First Lady (1968)—which, completists may be fascinated to know, I’ve actually read. 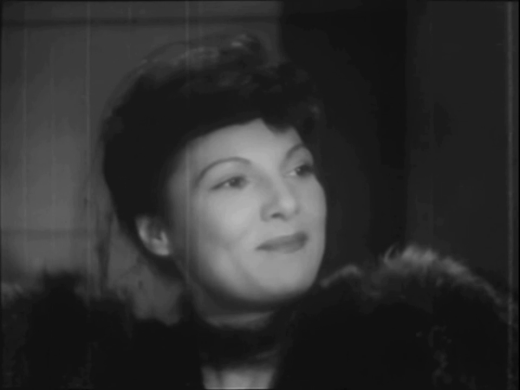 This is a contribution to Rich Westlake’s 1941 roundup at his Past Offences site.