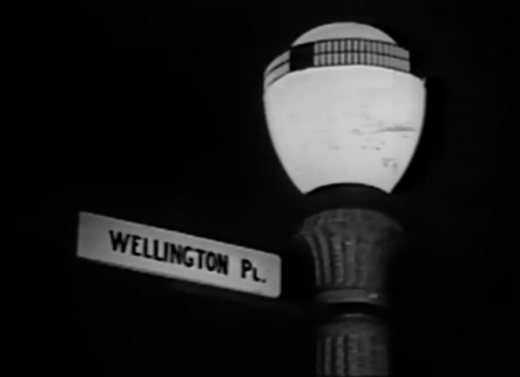 In town for a medical convention, prominent New York nerve specialist Dr. Steven “Steve” Walcott (Atchley) stays at the Clarendon Arms. He’s visited in Apartment A there by his old friend William “Bill” Cornish (Boyd), a senior investigator in some official capacity (it’s never spelled out exactly what). Cornish has discovered a charred human earbone in the room’s fireplace. While they’re chatting about this curio and other matters, Walcott stands at the window trying out a pair of astonishing spectacles Cornish owns ‑‑ these optical marvels have the power of binoculars!

Suddenly he collapses in a heap. Cornish phones for the hotel management, who arrive in the shape of manager Mr. Gordon (Gordon), desk clerk Rankin (Whitlock) and resident house physician Dr. Bronson (Smalley). Bronson diagnoses Walcott’s collapse as a reaction to the heat; Cornish, no fool, waits until the men have gone and then confides to Walcott that in reality he was grazed by a bullet.

The two old friends’ investigations lead them to Enid Van Buren (Dell) and her fiancé Erich (Harron). We discover through a series of flashbacks that Enid arrived in the US from Sumatra a few months ago with her sick brother Ralph (uncredited). She had to go briefly to Salt Lake City on urgent business related to an estate the two siblings inherited; when she returned it was to discover that her brother had vanished without trace and that the hotel staff claimed to have no record or memory of the siblings ever having been there. Even Apartment A, where they stayed, was decorated quite other than her recollection of it.

Believing her to be insane, local “alienist” Dr. Barris (Hall) had her committed to the “psychopathic ward” ‑‑ which is where she would still be had not stalwart Erich taken custody of her. Since then, an expert marksman, he’s been scaring off residents booked into Apartment A by firing bullets into the room. Now he and Enid plan to make their escape from the city.

Thinking (correctly) that Enid is in danger from the smarmy crew of the Clarendon Arms, Cornish, Walcott and Erich dash across the city to the mortuary run by Adolph Klein (Ingraham), one of the hotel’s major stockholders. Sure enough, Gordon has locked Enid into the darkened chamber where all the corpses are laid out and Rankin is making spooky noises through a speaking tube, the aim being to drive Enid genuinely insane this time. 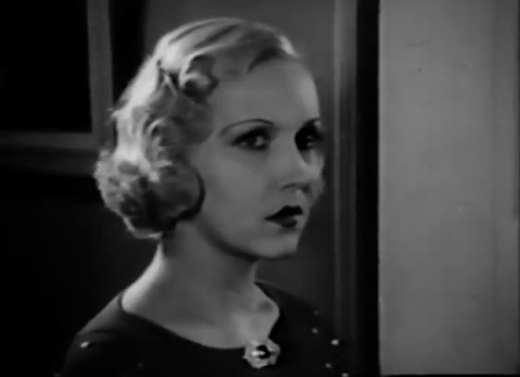 Enid (Claudia Dell) has no difficulty luring Walcott into the home she’s been sharing with Erich.

The truth emerges. While Enid was in Salt Lake City, Ralph died of bubonic plague. Realizing how much damage could be done to the hotel’s business ‑‑ and to the local community’s as a whole ‑‑ the Clarendon Arms staff and the city authorities hushed up the death. Stein cremated the corpse in Apartment A’s fireplace, which is how that charred earbone came to be there. Since no one has really broken the law and since, heaven forfend, the business of the local community must be safeguarded above all else, everybody agrees to keep quiet about what’s gone down and the two young lovers prepare themselves for the finale’s obligatory clinch.

The movie seems to fall into three parts. The first, up to the point where Cornish and Walcott find Enid and Erich and the latter starts to tell them the backstory, is quite extraordinarily stodgy, with painful pacing, bored direction, and performances (even from Dell) that seem determinedly amateurish. The second, as Erich narrates earlier events and we see flashbacks of them, manages to generate a certain amount of energy, and we settle ourselves in for what seems to have become a moderately good-fun cheapy. Alas, we then cruise into the third section, which is so poorly staged and above all so blitheringly silly that it’s embarrassing.

Consider the events of a couple of paragraphs ago:

William Boyd, who on occasion here seems to be a tad squiffy, was often billed as William “Stage” Boyd to distinguish him from the other William Boyd, whose primary claim to fame was that he played Hopalong Cassidy in countless B Westerns. Even so, the coincidence of names caused the latter considerable embarrassment ‑‑ and reportedly some professional damage ‑‑ when William “Stage” Boyd incurred various arrests for drug and alcohol offenses: on several occasions newspapers reporting these mishaps published photos of the wrong William Boyd alongside their articles. An irony here is that the Hopalong Cassidy created for the pulps by Clarence E. Mulford was a hard-drinking reprobate far more like the “other” William Boyd than the one who sanitized the character’s onscreen persona.

One odd note in the movie is that, while Boyd’s character is referred to throughout as William or Bill, in the credits Cornish’s forename is given as Thorvaldt. It’s hard to believe this was just a straightforward error.

No one comes out of this movie with a huge amount of credit. Dell produced many fine B-movie performances, but this isn’t among them; in one sequence she tries to act the sophisticate, and all she shows are her own thespian limitations (or, just as likely, Bennet’s limitations as a director). Atchley brings some vim to his part and remains eminently watchable throughout, and the same could be said of Harron. As for the rest? Let us dance gracefully away from the topic.

The movie’s worth watching nonetheless, firstly for Claudia Dell, who even on an off-day has admirable screen presence, and secondly for that central section.

A sign of the times is this small exchange during the madcap drive across town by Enid’s three rescuers:

Erich: Hurry, Walcott! Hurry!
Cornish: He’s doing fifty now! You don’t want to arrive there in pieces, do you?

You’ll often come across references to DANGEROUS CROSSING (1953) as a remake of this movie; that’s bunkum, not least because (a) the later movie was based on a John Dickson Carr play first staged in 1943, over a decade after Midnight Warning was made, and (b), besides, it bears little resemblance to Midnight Warning. There’s a far stronger discernable influence on So Long at the Fair (1950), that great Dirk Bogarde/Jean Simmons outing. The latter was based on the 1947 novel by Anthony Thorne; it’s theoretically possible Thorne lifted the guts of his plot from Midnight Warning, more likely that both drew upon the same urban legend.

On Amazon.com: The [sic] Midnight Warning