Paul Langley (Patterson), who served with distinction in WWII and was renowned for his daring escapes from POW camps, has been jailed for smuggling, a crime for which he’s adamant he’s innocent. He uses his old wartime skills to bust out repeatedly from prison: “There are a lot of people in this world that need things like drugs and alcohol,” he tells the prison padre (Colin). “With me it’s excitement—even danger.” But now there’s a new imperative: his wife Joan (Young) is expecting their child imminently and, bearing in mind that her own mother died giving birth to her, there are fears for her safety.

Joan (Felicity Young) languishes in hospital: “Promise me I’ll be all right!”

While being transferred to Dartmoor, Paul breaks free yet again. Wise old Inspector Walters (Goodliffe) reckons Paul will do all the foolish things escaped cons usually do: go to his flat to pick up stuff and then, on discovering Joan is already in the hospital, move heaven and earth to be there for the birth. To the incredulity of Walters’s fast-tracked sidekick Detective-Sergeant Morrison (Phillips), Paul behaves exactly as Walters predicted. 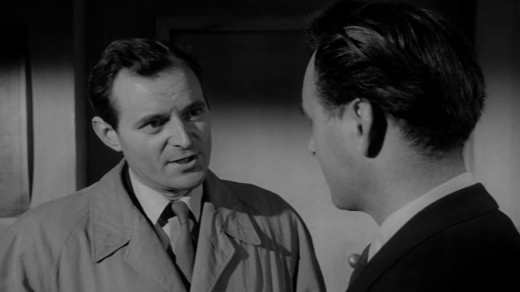 The cops throw a cordon around Pail’s flat, little knowing that he got there ahead of them. He manages to escape with the help of one of his old POW buddies, Harry (Siddons), and then, aided by Harry’s assistant Hilda (Towers), manages to infiltrate the hospital. There he must dodge cops galore, including Morrison and Walters, as well as crafty, hardbitten newspaper reporter Jack Brunel (Solon, in a typically fine rendition). The flirty nurse Wendy (Vaughan) and her primmer colleague Ann Fisher (Wyatt) take a fancy to this stranger, whom they believe is a new addition to the medical staff. Even when she discovers otherwise, Ann risks everything to try to unite him with Joan and save him from arrest . . .

This is one of those unexpected gems that occasionally bring joy to the B-feature watcher’s heart. It’s quite obvious that its budget was meager, but the cast is terrific (even Patterson, no Olivier—see October Moth [1960], for example—renders a more than adequate performance, after a shaky start), the screenplay is far above the standard you expect from a program filler, and the direction, never less than skilled, sometimes hits the heights; among these heights is a deathbed scene that, because done with such great sensitivity and artistry, transcends B-featuredom to become genuinely affecting. 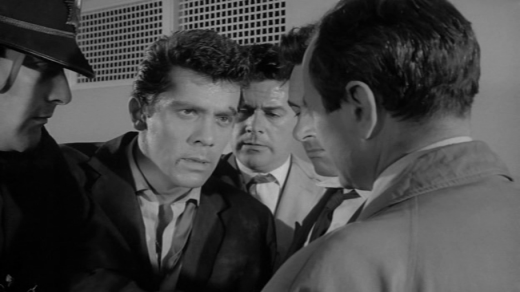 Recaptured after a struggle, Paul (Lee Patterson) has earned the respect of Inspector Walters (Michael Goodliffe).

Born in New Zealand, Ewen Solon was one of those top-notch but unobtrusive and hence underappreciated actors who, during the 1950s and after, turned up everywhere on UK television and played innumerable supporting roles in movies for the big screen; some of the latter were far up the cinematic pile from The White Trap, such as The Dam Busters (1955), 1984 (1956) and The Hound of the Baskervilles (1959). He probably achieved his most significant renown, at least in the UK, playing Lucas to Rupert Davies’s MAIGRET in the acclaimed BBC TV series (52 episodes, 1959–63). Yvette Wyatt, who gives a fine performance here as the prissy nurse who initially refuses to aid Paul because it’s against the rules, but melts as she discovers her own human decency speaks louder than the rulebook, had a paltry screen career, surprising in view of her very evident talent. Her greatest claim to fame was as another nurse, Sister Phillips, in 24 episodes of the seemingly interminable soap opera Emergency—Ward 10 (1957–67).

UK readers may be intrigued by the shop sign on the left: how things have changed.

In the US The White Trap was screened on TV as part of the Kraft Mystery Theater (presumably much cut): Series 1, Episode 7.

On Amazon.com: This is bundled in as an extra to the Edgar Wallace Mysteries vol. 2 DVD set. That set used to be available as an (expensive!) import on Amazon.com, but no longer. You can find it at Amazon.co.uk here. Alternatively, your best bet might be to catch it on t’telly, which is what I did at some stage.