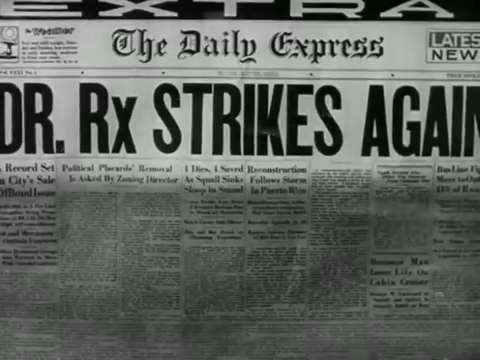 A mysterious serial killer, nicknamed Dr. Rx because of the notes he leaves with his victims, is strangling criminals whom silver-tongued defense attorney Dudley Crispin (Hinds) has succeeded in getting acquitted. Crispin hires PI Jerry Church (Knowles) to protect his current client, manifestly guilty mobster Tony Zarini (Fain). However, Fain dies in the courtroom within moments of his acquittal, surrounded by friends and lawyers yet seemingly strangled like all the others. 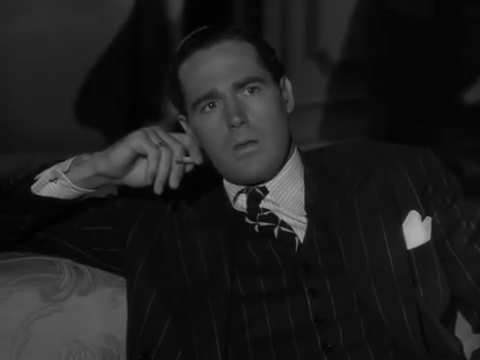 Detective Captain Bill Hurd (MacDonald) of the NYPD is baffled by the case and wants Jerry to collaborate with the police investigation. Jerry’s brand-new wife, mystery writer Kit Logan Church (Gwynne), is less keen for him to continue, having END_OF_DOCUMENT_TOKEN_TO_BE_REPLACED

The first of a series of six movies about the San Francisco PI James Lee Wong, created in print by Hugh Wiley; the first five movies starred Boris Karloff as Wong, while the sixth starred an actual Chinese-American in the role, Keye Luke. Depressingly, that sixth movie, Phantom of Chinatown (1940), flopped and so the series came to abrupt end. (When I get a chance, I’ll add it to this site. But it seemed silly to start watching a series with its final entry.)

I confess that for years I’ve avoided the Mr. Wong movies—as I generally do the Charlie Chan ones—because I find it just as creepy to watch a white actor play what I suppose we have to call Yellow Face as I do watching white actors play Black Face. I have to report, though, that the experience wasn’t as grueling as I’d expected. There is no mockery at all of Chinese culture or mannerisms. To the contrary, Wong is the most respected character in the movie; at one point the romantic lead compares the elderly Wong so favorably to her police-detective boyfriend—“Mr. Wong, it’s been such a pleasure meeting a detective with such charming manners”—that the cop’s eyes narrow in jealousy.

The Dayton Chemical Co. is planning to ship a consignment of toxic chemicals to Europe aboard the good ship Orinoco. The operation is spied upon by Lescardi (Bruno), an enforcer working for a pair of activists embedded in European politics, Anton Mohl (Prival), who goes by the name Baron von Krantz, and Olga Petroff (Evelyn Brent), who goes by the name Countess Dubois. They’re eager to divert END_OF_DOCUMENT_TOKEN_TO_BE_REPLACED

On the eve of accepting a new job as Assistant Prosecutor, lawyer David Harrison (Quigley) becomes engaged to his longtime secretary Linda Wilson (Reynolds). That same night, however, her ex-fiancé Tony Baxter (McTaggart) calls by her house; released from jail after serving four years for robbery, he wants to reclaim the stash he left with Linda’s kid brother Jerry (Masters) . . . and is mortified to discover Linda made Jerry turn over the loot to the cops. And, of course, Tony would like to renew relations with Linda.

She tries to tell him to get lost, but in the end agrees to meet him later that night at his lodgings in the down-at-heel Arcadia Cottages . . . where, unknown to her, Tony has booked her in as his wife. By the time she gets there, however, Tony has broken it to his old accomplice Sniffy (White) that the loot they stole together is no more; Sniffy, believing Tony’s trying to stiff him of his share, shoots him—although the wound’s only superficial. As this is all going on, Linda arrives and, separately, Jerry, the latter with a gun; when Linda struggles to get the gun from him, it goes off. No one’s hurt by this accidental detonation but the appearance is that it might have been Jerry who shot Tony, and Tony isn’t planning on telling the cops who his assailant was, not when he has the chance to make David look stupid in front of the woman they both crave.

To the bafflement of the DA, William Burt (whom we don’t actually see), David persists in pressing the prosecution of Jerry even after forensics demonstrate the bullet that wounded Tony didn’t come from Jerry’s gun . . .

The story’s obviously somewhat fanciful, but at the same time it’s rather cleverly worked out, and overall this is quite neatly scripted—a cut above the PRC norm. The production values and acting standards are, alas, more as we’re accustomed to seeing from this studio: scenery that looks as if it might fall over if anyone slams a door too hard, hasty sound editing, and patchy acting, with Reynolds her usual charming self, McTaggart and especially Masters surprisingly good, and all the rest—including leading man Quigley—being at best blandly forgettable.

Reynolds’s time of glory was just about to begin: the following year she’d be starring opposite Bing Crosby and Fred Astaire in Holiday Inn (1942); by then, though, she’d have made no fewer than six further movies for the likes of PRC.