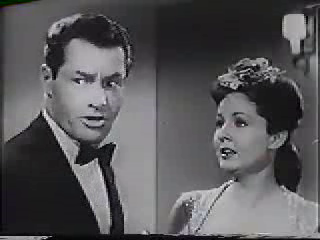 Kane Richmond as Lamont and Barbara Read as Margo

In the second of Monogram’s three installments of Shadow chronicles—the first was The Shadow Returns (1946)—the “humor” has been allowed to swallow up entirely any elements of suspense that might have been there.

On the eve of the marriage between Lamont (Richmond) and his secretary, Margo (Read), someone impersonating The Shadow knocks off blackmailing journalist Jeff “Man About Town” Mann of the Daily Bulletin (Cardwell) and—for no apparent reason—a END_OF_DOCUMENT_TOKEN_TO_BE_REPLACED 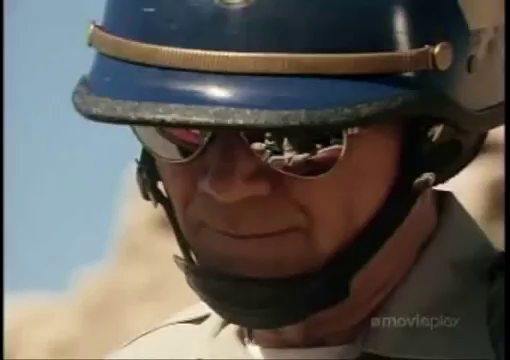 China Lake, a small town in the middle of the Nevada desert. Sheriff Sam Brodie (Skerritt) arrived here not so long ago after years policing in the Big City in hopes the move would save his marriage; it didn’t, but he stayed anyway . . . and now he’s ripe for seduction by the lovely secretary at the China Lake PD, Cindy (Everhard), who’s hot for him even though he’s twice her age. Because that’s how things happen in derivative cop movies like this one. 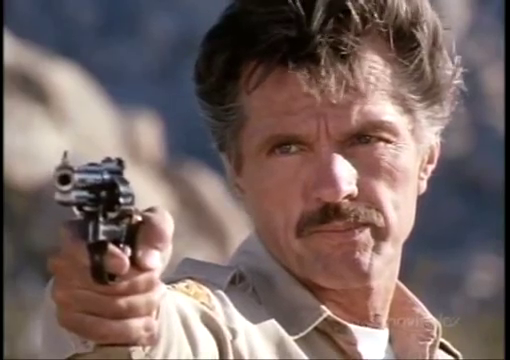 Traveler Helene Harrelson (Parker) is found dead in the trunk of her car in the midst of the desert, someone having murdered her by the simple method of END_OF_DOCUMENT_TOKEN_TO_BE_REPLACED 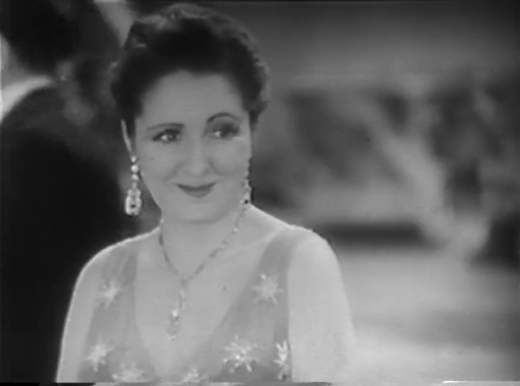 Charlie Townsend (Blackmer), US Vice-Consul to an unidentified South American country, takes his lovely wife Margaret (Dove) for granted, deserting her at every turn in favor of his duties. He doesn’t notice that, when internationally renowned big-game hunter Jack Norton (Tearle) arrives in town, there’s immediate electricity between Margaret and the newcomer. 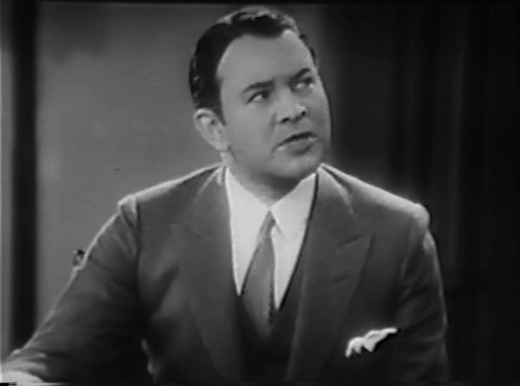 Also in town is a top US Treasury Department agent, Farrell (Ingraham), who’s keen to END_OF_DOCUMENT_TOKEN_TO_BE_REPLACED 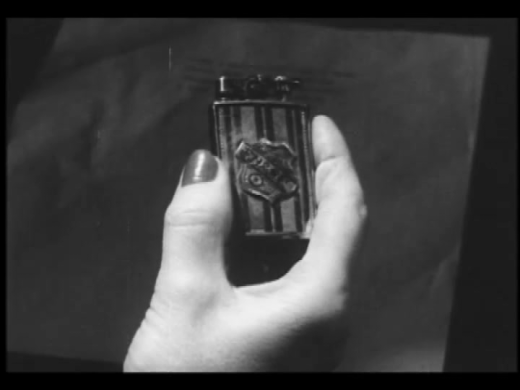 A high-spirited comedy thriller/mystery from Monogram, the first in an intended series that for some reason never made it past the second outing.

Kitty O’Day (Parker) is secretary to broker Oliver M. Wentworth (Earle) and girlfriend of one of Wentworth’s gofers, Johnny Jones (Cookson). One evening, after Johnny has brought a fortune in securities to Wentworth, the broker tells Kitty to go and fetch train tickets to Boston for the following day and to meet him later at his home for a last couple of urgent letters. Johnny, who’d bought theater tickets for tonight, is naturally miffed, and sounds off on the sidewalk to her about what he’d like to do with their boss. His tirade is overheard by a nearby taxi driver (Gleason), who’s especially startled by the line: “I’d like to kill him.” 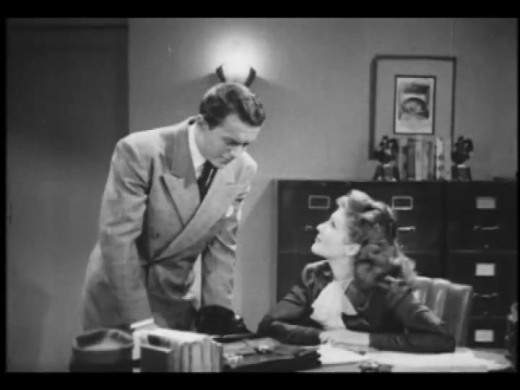 When Kitty reaches the Wentworth establishment she finds it’s suffering a power outage. A candle-bearing butler, Charles (Hytten), tells her that END_OF_DOCUMENT_TOKEN_TO_BE_REPLACED

What is the mystery of the empty 13th chair? 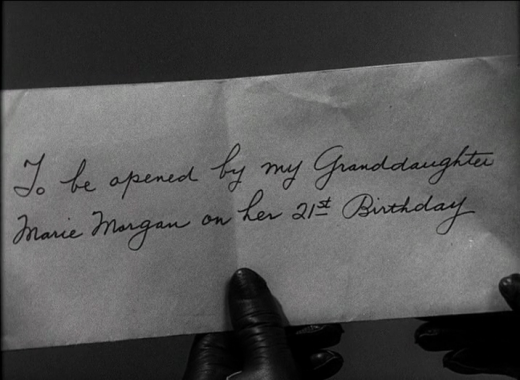 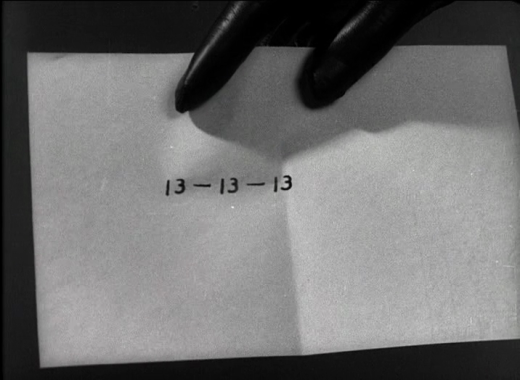 Thirteen years ago, in the old Morgan home at 122 Mill Road, Grandpa Morgan (Ingraham) convoked a meeting of his ten possible heirs, plus his lawyer, John Barksdale (Ring). The twelve of them sat around a table at which a 13th chair remained empty—the nonexistent “13th guest” of the title, even though this would be technically not the 13th but the 12th guest. Grandpa announced that his will was contained in a sealed envelope, which he passed to his seven-year-old granddaughter, Marie (Anderson), on condition that she open it on her 21st birthday while seated at this very table.

Fast forward to today, as one dark night the grown-up Marie Morgan (Parrish) lets herself into the old family heap. She’s astonished to find that, even though the place has been closed up for thirteen years, the phone and electricity are still on. In the gloom a shot rings out and, the next we know, Marie END_OF_DOCUMENT_TOKEN_TO_BE_REPLACED

This was the third movie version of Wilson’s novel and the hit Broadway play based on it. The earlier versions were Merton of the Movies (1924) dir James Cruze, with Glenn Hunter, Charles Sellon, Sadie Gordon and Gale Henry, and Make Me a Star (1932) dir William Beaudine, with Joan Blondell, Stuart Erwin, Zasu Pitts, Ben Turpin and Charles Sellon, the latter reprising his role as Pete Gashwiler. There was also a Kraft Theatre version: Merton of the Movies (1947 TVM) with Eddie Mayehoff and Patricia Englund. Cruze’s 1924 silent has been lost, and the same may be true of the TVM. 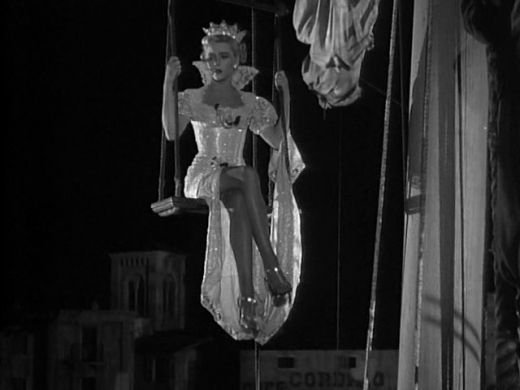 Beulah Baxter (Gloria Grahame), having just told the press she does all her own stunts, prepares to let stuntgirl Phyllis Montague (Virginia O’Brien) do the dangerous bit.

A satire of the movie business, this has no real noir relevance save for the presence in its cast of noir goddess Gloria Grahame (I’ve been working on a piece about Grahame for something else, which is what brought me to this movie), not to mention actor/producer/director Hugo Haas, whose enjoyably dire shoestring noirs have a minor cult following today. There are also some regular noir supports like Ames and Fowley.

It’s 1915 and Merton Gill (Skelton) is a cinema usher in Tinkerton, Kansas, and mad about the movies; his favorite stars are Lawrence “Larry” Rupert (Ames), famed for his detective roles, and the lovely Beulah Baxter (Grahame), famed for END_OF_DOCUMENT_TOKEN_TO_BE_REPLACED

Near the end of her sentence for having committed the mercy killing of a terminally ill, suffering patient who begged her for relief—a crime of which she is innocent—Dr. Rosemary Walsh (Hobart) gets dragged into a breakout mounted by fellow-prisoners Nellie (Rochelle) and Jane (Cole), with the outside aid of Nellie’s gangster boyfriend Nick Furelli (Clarke) and his sidekick Baldy O’Shea (Barnett). Jane goes her own way, and in due course Rosemary decides to give herself back up to the authorities. Nick hands her some money and tells her details of how to find him in NYC should she change her mind. 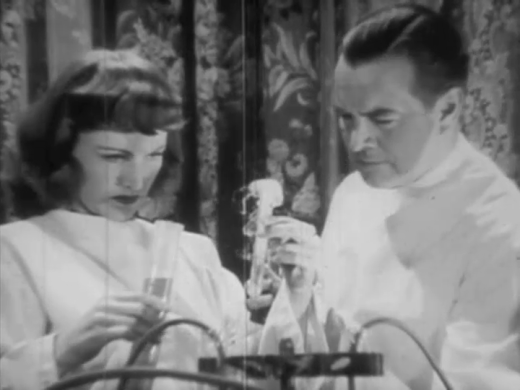 So that’s how this country doctoring is done!

Halfway back to the prison she indeed does change her mind. Pausing by a farmhouse, she discovers END_OF_DOCUMENT_TOKEN_TO_BE_REPLACED