The name that stands out in the credits of this short feature, aside from that of the versatile cinematographer, is J. Jefferson Farjeon, the prolific Golden Age crime novelist and playwright who returned to the limelight in 2014 when the British Library reissue of his 1937 novel Mystery in White became a surprise Christmas bestseller. END_OF_DOCUMENT_TOKEN_TO_BE_REPLACED

An Edgar Wallace yarn about a man addicted to the geegees . . . and to the curves of Greta Gynt! 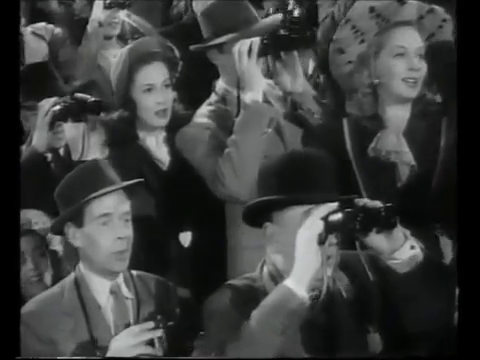 A modest but rather jolly screen adaptation of one of Edgar Wallace’s plays, which he subsequently rewrote as a novel. In fact, this wasn’t the first adaptation; it was preceded by The Calendar (1931; vt Bachelor’s Folly) dir T. Hayes Hunter, with Herbert Marshall, Edna Best and Anne Grey, which I haven’t seen. This, the 1948 remake, while in theory a thriller has in practice many of the attributes of a bedroom farce, although it’s not really a comedy either: just a piece of entertainment.

Captain Garry Anson (McCallum), a compulsive better on the ponies, owns a string of racers; his trainer is the lovely Lady Mollie Panniford (Holm), who, as a woman, is a rarity in the male-dominated horse-training world of the time. “What you mean is that, as a girlfriend, I’m a pretty good trainer,” she observes ruefully to him at one stage. The reason for the rue is that he’s besotted with Wenda (Gynt), to whom he’s been engaged for many a yonk. Then the news comes that the will of his recently deceased aunt has brought him END_OF_DOCUMENT_TOKEN_TO_BE_REPLACED

Hawtrey Charters (Radford) and Sinclair Caldicott (Wayne), the two eccentric, cricket-maniacal Englishmen made famous in The Lady Vanishes (1938), appeared in a series of other movies, of which this is one; it’s adapted from a BBC radio comedy drama.

The pair are members of an escorted Middle East tour when their charabanc runs out of gas in the middle of the Saudi Arabian desert. They’re at first a bit leery at the approach of a caravan of Arabs, but soon it emerges that the leader, Sheik Ramda (Oliver), went to the same English public school as Charters. The Sheik puts all the tourists and their guide up for the night, which is welcome; even so, our two heroes do have concerns, such as that Caldicott might be late for his rendezvous in Budapest with his fiancée, Charters’s sister Edith (Hood), and, far more important, that both men might miss the final (cricket) Test match between England and the Windies at Lords. Moreover, as Ramda explains to them, there are agents of a foreign power stirring discontent among the traditional Arab population.

Back in Baghdad and with some time to spare, they seek an eaterie. What they find is a joint offering Folies de Londres avec Les Girls and featuring danceuse/chanteuse La Palermo (Gynt) in La Danse d’Hibou (aka La Danse de Voiles). “Looks a bit continental, doesn’t it?” observes Charters.

“Looks a bit continental, doesn’t it?”

By astonishing coincidence, this is precisely the dive whose cigar-smoking Nazi manager, Rossenger (McLeod), is tonight expecting two German agents to END_OF_DOCUMENT_TOKEN_TO_BE_REPLACED

Feared internationally, the crook Henry Arthur Milton, better known as The Ringer—because he could ring the changes with his disguises—finally met his end in Australia. Or did he? According to his wife Cora Ann (Gynt) he somehow escaped and has now made his way to London. That’s what the cops think too, and the slightly sinister Chief Inspector Bliss (Wooland), recently returned to Scotland Yard from a somewhat mysterious secondment in New York, is put in charge of the case. He liaises with Inspector Wembury (Victor) of the Met, whose Deptford territory includes the home of powerful criminal lawyer Maurice Meister (Lom). It’s thought that the reason The Ringer has come back to London is to seek vengeance on Meister, whom he blames for the suicide some years ago of his (The Ringer’s) sister Gwenda.

Wembury enlists the aid of cheery Cockney burglar Samuel “Sam” Cuthbert Hackitt (Hartnell), who has just been released from prison; although too terrified to END_OF_DOCUMENT_TOKEN_TO_BE_REPLACED

Years ago cantankerous Arnold Burgoyne (Hannen) quarreled with his two brothers, and the family wound was never healed. Now he summons his brothers’ grown-up children—plus his lawyer, E.M. Wilbraham (Brook-Jones)—to his stately home, Clarendon, to tell them of the latest changes he plans for his will.

His niece Sophia “Sophy” (Gynt) has made her way in the world as a successful mystery novelist, and has no need of his money. His elder nephew, Philip (Sinclair), inherited the adjoining Burgoyne family estate, Morton Curlew, where he lives with his wife Dorothy “Dotty” (Lawson) and breeds racehorses. Arnold’s younger nephew, the broke and diffident Henry (Van Eyssen), is planning to marry a French stage actress, Esmé Robert (Cordet), who joins the party.

It has been Arnold’s intention to leave Clarendon to Henry, but END_OF_DOCUMENT_TOKEN_TO_BE_REPLACED

On the wall behind, a sign of the times.

On the eve of World War II, Arsenal—the UK’s champion professional football/soccer club (and a giant of football history)—mounts a friendly charity match against gifted amateur side the Trojans, who have been scalping quite a few of the major professional teams. Most of the then Arsenal side have minor roles, and all of them play during the on-field extracts. (In those of the extracts where the opposition seems competent, the opposing team was in fact Brentford Football Club, playing against Arsenal for real in a league match.) George Allison, then the team’s manager, has a fairly central role (as himself), and for the most part fulfills it more than adequately; Tom Whittaker, the club’s trainer, and the soccer commentator E.V.H. Emmett likewise play themselves in non-negligible roles.