When this was first aired in 1956 it came not during the Christmas period, as one might have expected, but on June 25. It was Season 1, Episode 39 of a successful series, Highway Patrol, that ran for four seasons (1955–9) and a grand total of 156 episodes. The star throughout was Broderick Crawford as Dan Mathews, head of the Highway Patrol in an unnamed state that looked uncommonly like California—not surprisingly, since the series was instigated at the suggestion of the California Highway Patrol, which is acknowledged in the opening credits and served as technical consultant for the first two seasons. 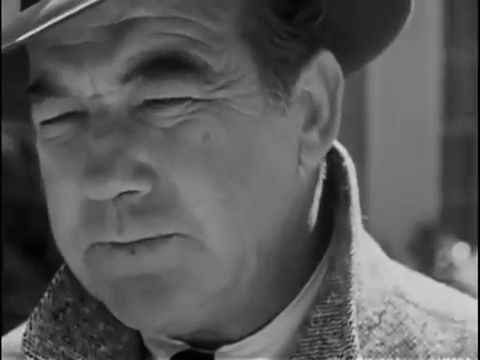 Broderick Crawford as Captain Dan Mathews of the Highway Patrol.

You can get the flavor of the series from the introductory narrative, spoken by Art Gilmore:

Whenever the laws of any state are broken, a duly authorized organization swings into action. It may be called the State Police, State Troopers, the Militia, the Rangers . . . or the Highway Patrol. These are the stories of the men whose training, skill and courage have enforced and preserved our state laws.

Of course, in real life the Highway Patrol is concerned with things like END_OF_DOCUMENT_TOKEN_TO_BE_REPLACED