Can a polygraph tell if someone’s lying if they’ve been hypnotized into making a false confession?

Gangster Tully Borgman (Sutton) hypnotizes sucker Greg Brovane (Falk) into believing that he was part of a supermarket robbery that left two guards dead, and feeds him with the names and descriptions of three invented confederates, then calls Steve Carella (Lansing) of the 87th Precinct with an anonymous tipoff.

As Tully tells his criminal buddies,

“The best part of the whole thing is the cops are looking for three guys that don’t even exist.”

Under questioning by Carella and Meyer Meyer (Fell), Brovane insists that what he’s telling them is the truth, and a polygraph test run by END_OF_DOCUMENT_TOKEN_TO_BE_REPLACED

Everyone seems to be reeling out their end-of-year Best lists at the moment. I have difficulty thinking that way: as soon as I decide Something is my favorite movie of the year I suddenly realize that Otherthing was pretty good too, maybe even better than Something — and, hey, wait a minute, what about Yetanotherthing? And then there’s . . . Another worry is that we’ve reached just the 1st of December. Is it not possible that something better than all of them will come along during the remaining 1/12th of the year?

So Noirish isn’t going to produce a Best of Year list. But, in a foolish, idle moment, I thought it might be of interest to offer a list of those books that I’ve read in my leisure time this year that I’ve particularly enjoyed; they may not all be the best that I’ve read during the year, but they all floated my boat at the time. Here they are, not ranked (although the first on the list is likely the book I’d rate highest) but in the reverse order in which I read them — most recent first. If others come along between now and December 31, I’ll add them. It’ll be noticed that in a couple of instances I was so impressed by my first encounter with an author that I broke my usual habit and read more of their books soon after.
END_OF_DOCUMENT_TOKEN_TO_BE_REPLACED

The pilot for the shortlived (1961–2) TV series 87th Precinct, this sees the boys of the 87th tackle the case of a floater found in the river. The medical examiner reports that she didn’t drown but was dead of arsenic poisoning before going into the water, and that she has a small tattoo of a heart with “MAC” inside it on the sensitive flesh between her right thumb and forefinger. Detectives Steve Carella (Lansing) and Meyer Meyer (Fell) soon identify her in the Missing Persons records as Scranton native Mary-Louise Proschek, who ran away from home to the big city to escape boredom and find love. The tattoo is recent, and so Carella, Meyer and Detective Bert Kling (Harper) start combing the city’s tattoo parlors to see if anyone can recall Mary-Louise. 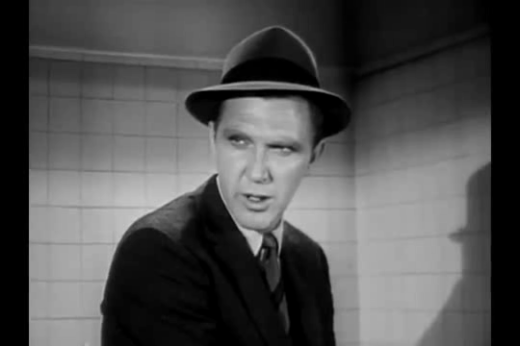 Steve is accompanied on one such visit by his mute wife Teddy (Rowlands). Although the tattooist, Charlie (Yung), has never done such a tattoo—he explains it would be painful—Teddy becomes fascinated with the idea of having a tattoo of her own: a butterfly on her shoulder. Some while later, END_OF_DOCUMENT_TOKEN_TO_BE_REPLACED