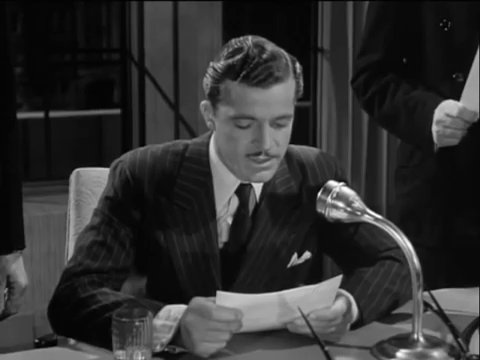 November 1941, and US radio journalist Bill Roberts (Andrews) broadcasts regular reports home from Berlin. Despite being heavily scrutinized by the Nazi censors, these contain coded messages telling the truth about how (badly) things are faring in Germany, and revealing Nazi plans. At the New York Chronicle Bill’s colleague Red (Sande) interprets the codes and writes the stories, to the perplexity of the Gestapo. 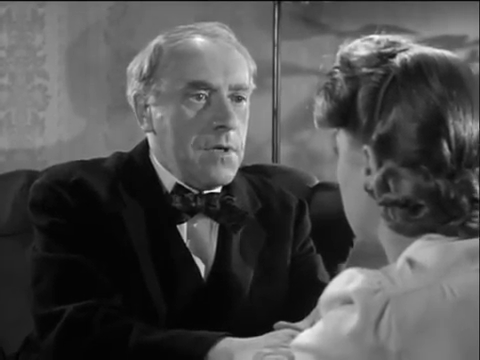 Bill has been getting his information at a philatelical shop from elderly Rudolf Hauen (Kalser), who has picked it up over the supper table from END_OF_DOCUMENT_TOKEN_TO_BE_REPLACED

Jimmie Atkins (Moran) is office boy at the Brownsville Bugle. All Brownsville—evidently a small town in the middle of nowhere—is agog over the trial of Olaf Jensen (Rub) for the murder of his employer, farmer Mary Blake. Jimmie, though, is a friend of Olaf’s and decides to prove the man didn’t do it. In this he’s assisted by pretty Mildred “Millie” Henshaw (Jones), visiting niece of END_OF_DOCUMENT_TOKEN_TO_BE_REPLACED

Ashton-Wolfe, upon whose magazine series this movie is based, was a UK detective who claimed to have studied in Paris under the famous Alphonse Bertillon (of Bertillonage fame) and apparently assisted the great man in a number of cases; he wrote several books of true-crime stories. Here, although the character of Bertillon (Kinnell) plays some part in the detection, it’s as if his role were being deliberately minimized: his lines are few and far between except in one scene, while elsewhere—as with Tom Mason’s scenes in Plan 9 from Outer Space (1959) when he was substituting for the deceased Bela Lugosi—it seems artificial devices are being used to obscure his face or keep him silent. Whatever the reason for this—Bertillon had been dead for years so he can’t have been demanding residuals—we’re treated instead to a few examples of Bertillonage-style “scientific detection” as well as much that seems to have been borrowed from the Universal horror lot.

No one but her father Anton (Rub) and the Sûreté’s recently murdered Brigadier Georges Danton know that lovely Parisian street flower-seller Eugenie Dorain (Andre) is really an orphan from Moscow, adopted by Anton in infancy. Bertillon’s chief sidekick at the Sûreté, François St. Cyr (Morgan), given the Danton case, is making only minor headway when Anton is murdered; beside the body is a note written in blood, naming Eugenie’s boyfriend, the pickpocket and burglar Leon Renault (Warburton)—evidence that St. Cyr immediately spots as phony because supposedly written with his right hand by the left-handed Anton. Meanwhile Eugenie has disappeared. Seeing the advantages of having a professional crook aiding his investigation, St. Cyr enlists Leon.

Soon it’s revealed that Eugenie has been abducted to his château by the Russian émigré and keen taxidermist General Han (sic) Moloff (Ratoff), who is hypnotizing her into the belief that she’s in reality the missing heir to the Romanov millions, the famed Princess Anastasia. The effects of the hypnosis are somewhat patchy; the entranced Eugenie seems to have something in common with Moloff’s taxidermical specimens, and has little relapses, every time she sees a well filled vase, into trying to hawk flowers to the staff of the château. On being introduced to Grand Duke Romanov (Korff)—Anastasia’s Uncle Maxim—supposedly after decades apart, Eugenie observes astutely: “You look older.”

For this and other reasons, the Grand Duke refuses to believe Eugenie can possibly be his missing niece; shortly afterward, the Baron stages a fatal car crash for the Grand Duke by means of a back-projected image of an oncoming heavy truck . . . although for some reason he leaves the screen in place and the projector barely hidden so that Bertillon’s men can within minutes show this was no accident.

But then who can follow the thought processes of a thorough bad hat like Moloff? After all, anyone who has the habit of filling the veins of beautiful women with formaldehyde and then covering the naked corpses with plaster for use as Grecian-style statuary around his château must be a trifle . . . idiosyncratic. The cops, headed by St. Cyr, arrive just in time to save Eugenie from formaldehydification and Leon from an “It’s alive!”-style electrocution.

Some of the acting’s very poor, while Ratoff just hams, but Warburton’s good as the patriotic petty thief Leon (“I never rob Frenchmen”) and Morgan does his best as St. Cyr despite being made to perform one of the stupider examples of the “comic interlude” deemed obligatory in 1930s Hollywood: an unusual brand of cigarettes seems pertinent to the case, so this senior policeman goes undercover as an ostentatious drunk in order to buy a packet of them . . . even though no one would have noticed or batted an eyelid had he simply gone into the café in question and dropped his 20 francs on the counter.

This was one of just seven screen outings—all B-movies—for the extremely lovely Copenhagen-born Andre. She thereafter relapsed into alcoholism, finally, aged 51, immolating herself in her apartment with a heap of promotional stills and other career mementoes as her pyre.