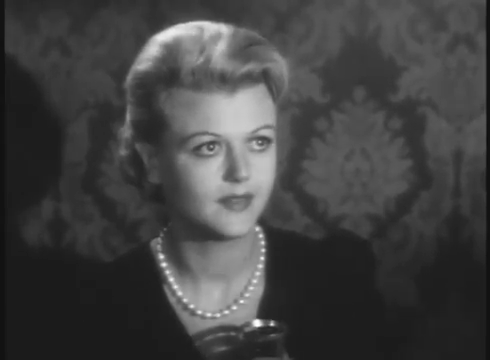 An unnamed diner (Colman) sees Joan Robinson (Lansbury) arriving at a table on the far side of the restaurant where he’s seated with his lovely companion Laura Green), and takes the opportunity to tell Laura about Joan’s backstory.

Joan was governess to the family of pretentious socialite Edythe Livingstone (Forbes). Invited to one of Edythe’s parties to make up the numbers, Joan wore her string of cultured pearls—worth at most fifteen shillings. Star party guest and renowned gems expert Count Borselli (Macready) for fun told the assembled snobs that the pearls were, in his educated opinion, worth at least £60,000. At once Society, including her employer, assumed Joan was in reality not the working-class orphan she claimed to be but an aristocrat fallen on hard times.

Ronald Colman as the narrator.

When the truth emerges END_OF_DOCUMENT_TOKEN_TO_BE_REPLACED

Through the 1930s and 1940s, the bottom half of the cinema bill was thronged with—was almost defined by, if you ignored the oaters—comedy-crime movies like this one. Some of them were pretty good and are fondly remembered. Others, like the godawful BOSTON BLACKIE series starring the godawful Chester Morris—through all of which your correspondent has glumly sat—were, well, you heard it here first: godawful.

By Whose Hand?, which has the probably illusory feel of being a pilot for an unmade series starring ace journalist Jimmy Hawley, END_OF_DOCUMENT_TOKEN_TO_BE_REPLACED 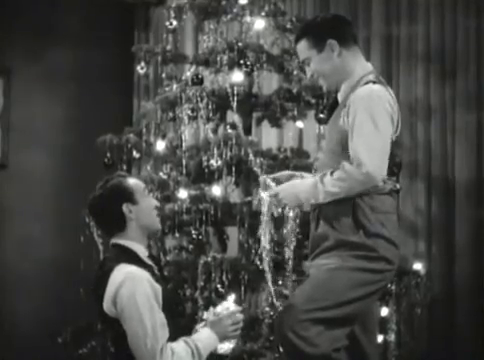 It’s Christmas Eve and Boston Blackie (Morris)—a sort of Robin Hood figure, a reformed criminal who now helps the downtrodden and solves crimes—has mounted a vaudeville show for the inmates of the state prison. Eve Sanders (Mara), a friend of the famous clown Roggi McKay (McKay), begs to be included in the company so she can have an additional chance to see her brother, Joe Trilby (Parks), who’s doing time for a crime he didn’t commit. During the performance, Joe overpowers Roggi, steals his clown costume, performs his act, and then travels back to the city on the performers’ bus—among his fellow-passengers being Blackie’s old nemesis, Inspector Farraday (Lane).

Joe plans to knock off the two crooks who framed him, Duke Banton—”that tin-horn bookie from Saratoga,” as someone calls him—and Steve Caveroni (Fix), currently working as a cabby. Informed by END_OF_DOCUMENT_TOKEN_TO_BE_REPLACED