Although this was the third and last to be released of the three DICK BARTON movies produced by Hammer, it was actually the second to be made. It therefore seems to make sense to discuss it here before Dick Barton Strikes Back (1949), the last to be made. The predecessor of Dick Barton at Bay was Dick Barton: Special Agent (1948), about which I waffled here the other day.

As soon as the credits are over it’s obvious this movie is a cut above Special Agent. There’s a genuinely suspenseful chase as a War Office agent called Phillips (played by an almost unrecognizably youthful Macnee) flees through the docks at Limehouse from two bad guys. They eventually catch him in a phone box and shoot him dead, but not before he’s been able to phone Dick Barton (Stannard) and gasp out an enigmatic message: “Two longs and a short.”

Patrick Macnee as a man on the run.

Dick races to the phone box and discovers the imprint of a three-fingered hand on the glass.

Meanwhile, in another part of town, END_OF_DOCUMENT_TOKEN_TO_BE_REPLACED

The first and the least of the three movies based on a hugely popular BBC radio series, Dick Barton—Special Agent (1946–51). The radio series appeared in the form of a nightly 15-minute episode Monday through Friday, with an hour-long omnibus version broadcast on the Saturday. Dick Barton was a sort of cleaned-up Bulldog Drummond; alternatively you might think of him as a prototypical James Bond. In his radio incarnation the stories were action-packed stuff. In this first of the Hammer screen adaptations, the studio made the foolish mistake of END_OF_DOCUMENT_TOKEN_TO_BE_REPLACED

Another tangled tale from Edgar Wallace!

I gave this movie basic coverage in A Comprehensive Encyclopedia of Film Noir, but at the time I hadn’t seen it myself (although I had read the novel). Recently I was able to watch it as part of the UK-released EDGAR WALLACE MYSTERIES Vol 3 DVD set (thanks, Stan!), one of seven volumes containing the complete series of these UK B-movies, originally released during 1960–64.

Susan Martin (Bell) has been losing hand-over-fist at the gambling club owned by slimy Emil Louba (Bauer), and he tells her that her IOUs have now added up to a staggering £10,000, money she doesn’t have. He offers to throw the IOUs away, however, if she’ll go on holiday with him to the continent and become his mistress. Susan, although visibly nauseated by the prospect, doesn’t see that she has much choice.

When she breaks it to her architect fiancé Frank Leamington (Watling) that she’s not going to marry him after all, he END_OF_DOCUMENT_TOKEN_TO_BE_REPLACED

Feared internationally, the crook Henry Arthur Milton, better known as The Ringer—because he could ring the changes with his disguises—finally met his end in Australia. Or did he? According to his wife Cora Ann (Gynt) he somehow escaped and has now made his way to London. That’s what the cops think too, and the slightly sinister Chief Inspector Bliss (Wooland), recently returned to Scotland Yard from a somewhat mysterious secondment in New York, is put in charge of the case. He liaises with Inspector Wembury (Victor) of the Met, whose Deptford territory includes the home of powerful criminal lawyer Maurice Meister (Lom). It’s thought that the reason The Ringer has come back to London is to seek vengeance on Meister, whom he blames for the suicide some years ago of his (The Ringer’s) sister Gwenda. 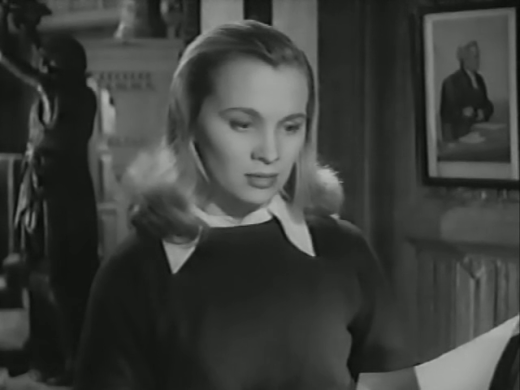 Wembury enlists the aid of cheery Cockney burglar Samuel “Sam” Cuthbert Hackitt (Hartnell), who has just been released from prison; although too terrified to END_OF_DOCUMENT_TOKEN_TO_BE_REPLACED