It’s a few years after the end of WWII, and Robert Rawley (Murray), a self-made millionaire (or thereabouts), cannot get over the fact that his beloved son by his first marriage, Simon, was one of those who never came back from the Front. Now he’s building a new cricket pavilion in the nearby village to commemorate Simon—even though his bumbling aristocratic neighbor, Lord Harry Clandon (Hicks), urges him to alter the dedication to honor not just Simon but all of the local men who died in the war, as does Robert’s second wife, Joan (Campbell), née Cummings,

Robert: Man can’t live with the dead.
Joan: No. But how hard you try.

Robert is a man whose snarl is very much worse than his bite. We see this essential goodheartedness in an early sequence when he’s informed by the foreman of the team working on the pavilion, Sugden (Woodbridge), that one of the laborers has fallen off the construction, damaging both the weathercock and himself. Robert rants about the lad’s stupidity and clumsiness and the fact that the broken weathercock might delay the Grand Opening, but at the same time he slips Sugden a hefty contribution to any medical expenses the culprit might have—more than enough to cover them all, if we’re to judge by Sugden’s expression. 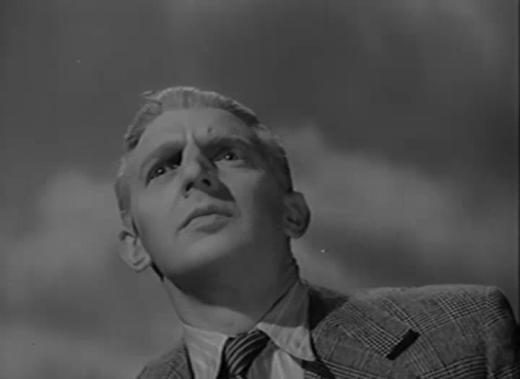 We first become aware that Robert’s blind when he trips over the tricycle that Clandon, who has come to visit, left at the steps of the mansion. Since we’ve earlier seen the Rawleys arrive home in a luxury car, it’s very clear how END_OF_DOCUMENT_TOKEN_TO_BE_REPLACED