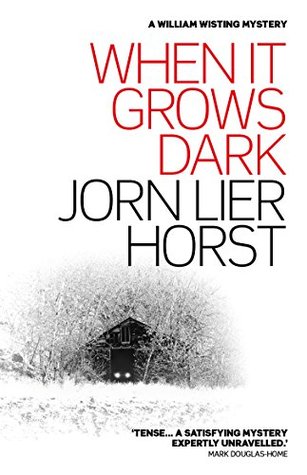 A prequel to a series of Norwegian police procedurals that I have not read.

Thirty-three years ago, in 1983, series protagonist William Wisting is just a humble patrol cop with a young wife, infant twins and too many bills. Trying to catch a habitual car thief, he and his partner make a discovery that may help in the solution to a series of ram raids on banks’ night safes. However, before he can do more than this he’s shoved to the sidelines to let the big boys tackle the case. So Wisting instead, with the encouragement of his boss, turns his attention to the puzzle of a recently discovered abandoned vintage car. Left decades ago in a ramshackle barn, the car has now been found to have bullet holes in its chassis. How did it come to be there, and what was the crime of which the bullet holes are now the solitary trace?

Needless to say, the two cases prove to be connected, and so Wisting emerges as the hero of the day. Even so, there’s still today, in 2016, one aspect of the matter that hasn’t been fully resolved . . .

Jorn Lier Horst’s series of William Wisting police procedurals is widely recognized as being among the best of its kind, and a recent entry had the distinction of being selected for the Petrona Award, which recognizes distinction in translated Scandinavian crime fiction.

As noted, this was my first taste of the series. Unfortunately, I came away from it feeling neither one way nor the other. I’d never really been bored but at the same time I’d never become more than superficially involved in either the tale or the characters. In the ordinary way I might have suspected this sense of flatness had to do with the translation, but I’ve read and enjoyed Anne Bruce’s work before so I reckon the problem more likely lies with the original text . . . or, quite possibly, with me: although I thought I’d kicked off the last traces of the solstitial blues by the time I read the novel, perhaps I was still under their influence.

I gather the other William Wisting novels are about twice the length of this one, so When It Grows Dark offers as good a place as any to start if you want to give the series a try. The Sandstone Press paperback is a really nattily produced little book — a pleasure to handle.