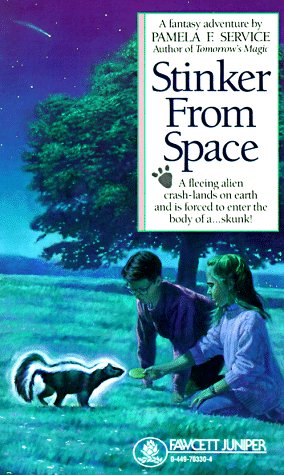 Yes, it was of course the title that grabbed me. I’ve read and enjoyed some of Service’s work before — although long enough ago that I now can’t remember any details — but when I recently saw this one for sale I simply had to have it.

The story’s pretty simple. Tsynq Yr, an alien in flight from the evil empire, crashlands on earth. His mortal body is dying of its injuries, but luckily the people of his species have the ability to transfer their mind to a new body. He transfers into the body of the first intelligent creature to come his way . . . which just happens to be a skunk. Thereafter Tsynq Yr can’t initially understand why the dominant lifeforms on this novel planet tend to react to his approaches with . . . wariness.

Yet he manages to make friends with Karen Blake and then her reluctant pal Jonathan Waldron, and between them the two kids and the skunk scheme to get Tsynq Yr back off the planet and out into the relative safety of outer space. Their plan seems simple: all they have to do to get it underway is hijack a space shuttle . . .

As you’ll guess from the above, Pam Service has a fertile imagination and a lively sense of humor; at times I was reminded of Harry Harrison’s work around the period he was writing things like Star Smashers of the Galaxy Rangers. I think I probably had a cheesy grin on my face all the while I was reading this (very short) book.

Recommended if you fancy an hour or so of diverting silliness, something I think we all need from time to time.