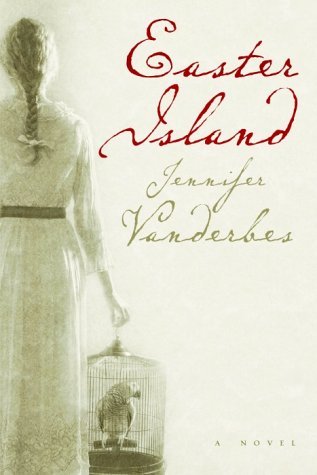 A beautifully written and genuinely fascinating novel that loosely interweaves two stories, set in different time periods, of women scientists coming to Easter Island, one of the most remote spots on the planet, and there managing to overcome the sexist prejudices of their day and establish themselves as independent individuals. While following their stories, we pick up along the way lots of juicy bits of information about sciences like botany, paleobotany, linguistics (did you know that Easter Island was one of only five locales where humanity invented written language, the others being China, Mesopotamia, Egypt and Mexico?), palynology (the study of small particles in nature, in this instance of pollen) and biogeography, not to mention dollops of science history and a plausible explanation of one of history’s great mysteries. I’ve probably missed a few of the sciences the narrative touches on.

The first story is that of Elsa Beazley, recently married to a much older husband because it’s the only way she can think of to protect her intellectually challenged younger sister from the attentions of the eugenicists, then enjoying a political vogue in the UK. Easter Island seems the perfect refuge for Elsa, a place where she can study her beloved botany — although quite soon she becomes absorbed instead in studying rongorongo, the untranslated written relics of the long-ago Easter islanders. Thanks to an elderly leper who remembers something of the old days, she in fact makes some headway in translating the pictographic inscriptions.

The other tale, interwined in the narrative with Elsa’s, is that of palynologist Greer Farraday, who comes to the island still reeling not so much from the death of her famed-palynologist husband eight months ago as from the knowledge that he stole from her the most important scientific work she’s done to date, claiming it as his own, and later was disgraced on the international stage for having falsified some epochal results. Greer is interested in establishing the past botany of Easter Island, in particular as to how it might relate to the island’s environmental denudation and the consequent collapse of its civilization. This gives her, too, reason to focus on the moai, the famous Easter Island statues: why did the descendants of the people who’d put so much societal endeavor into creating the statues, transporting them from their quarry and erecting them along the coast so determinedly cast them down?

There’s really a third tale here, the tale of the doomed final voyage of Graf von Spee’s fleet as it fled the Allies after the outbreak of World War One. While Elsa’s story is loosely based on that of a genuine scientific expedition to the island at about that time and Greer’s story is a fiction, albeit a fiction moored in real-life scientific research, the voyage of the doomed fleet is a matter of historical record. The author manages to hook the actuality up with Elsa’s story, although this was the one time while reading the novel that I rolled my eyes a bit.

Vanderbes indulges in the occasional injoke. The one that really made me grin appreciatively concerned Greer’s postgrad galpal at the University of Wisconsin, Jo Banks. The name didn’t ring a bell at all for me until, toward the novel’s end, it’s somewhat selfconsciously revealed that Jo’s full name is actually Josephine — a tip of the hat to that doyen of naturalists, Joseph Banks.

Venderbes’s writing is quite dense, and not conducive to skimming. This, combined with her attention to detail, means the book can move quite slowly, especially in its earlier parts — it’s a gripping page turner, or at least I found it so, but the pages don’t turn all that quickly. She’s also among the relatively few modern writers I’ve come across recently who can offer a narrative in the present tense (the whole of Elsa’s story) without making a complete hash of the past tenses within that narrative. It may not seem like much to you, but to me it was a delight not to be wincing every other paragraph at some new grammatical blunder.

In the very real sense that it’s fiction about science and scientific discovery, Easter Island is science fiction of a high order, although no one would ever think of it in terms of that genre — in the same way that most readers of The Handmaid’s Tale don’t think of it as science fiction, even though it manifestly is.

Take two very moving tales of self-discovery, add the thrill of scientific discovery plus oodles of intriguing nuggets of science, and then write it all beautifully to form an absorbing narrative. That’s the task Vanderbes set herself, and by golly did she succeed.