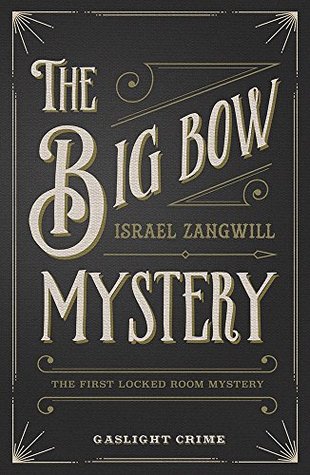 Published initially as a newspaper serial in 1891, The Big Bow Mystery is generally regarded as the first locked-room mystery novel. (It’s retitled in some editions The Perfect Crime to match the title of the 1928 movie based on the book, the first screen adaptation of three.)

No one can believe it when mild-mannered Arthur Constant is found dead in his bed one morning in the house where he lodged in Bow, in London’s East End. The dead man seemed to have had no enemies: he was a Christian and a socialist who practiced what he preached by trying to help the lot of the poor, he was personally generous to a fault, ever polite, ever affable and friendly. A fine, upstanding human being, in other words.

Scotland Yard, in the form of over-cocky Inspector Edward Wimp, soon focuses on Constant’s fellow lodger, the trade unionist and union organizer Tom Mordaunt, whose movements on the fatal morning were suspiciously complicated and who’s one of the few known to have quarreled with Constant, even though they were otherwise the best of friends. Was it possible that Constant had, behind Mordaunt’s back, shared the favors — so to speak — of Mordaunt’s fiancee?

The first big problem for Wimp is that, when Constant was found on his bed with his throat slashed open, that bed was in a room whose door was locked and bolted from within and whose windows were likewise; furthermore, the murder weapon, an open razor, was nowhere to be found. How could Constant have been murdered and the murderer escape when the room had been completely secured in this way?

Wimp’s second big problem is that the man whose job he took over at the Yard, retired Inspector George Grodman, hates his guts. Grodman was among those who discovered the body, and he has his own ideas — at complete odds with Wimp’s — about who killed Constant and how the “impossible” crime was perpetrated. We’re set for a battle of titans . . .

The novel’s distinctly slow in parts. After the discovery of the corpse, there’s what seems an interminable account of the coroner’s hearing, a hearing that ends with the coroner roundly proclaiming that both murder and suicide are equally impossible. Things pick up speed a little after this, but there are still a few longueurs to go. The language is as flowery as you might expect — Zangwill and his editor had, after all, column inches to fill — and a lot of the jokes that might have seemed side-splittingly funny in their day — about Helena Blavatsky and her Theosophical teachings, for example — are likely to be pretty impenetrable for most readers a century and a quarter later. (I’m sure there were plenty that flew right by me without my so much as noticing them.)

Although there’s a lot about the novel’s style that’s reminiscent of Dickens, not least the use of funny names for many of the characters — Crowl, Mrs. Drabdump, etc. — I found myself more reminded, in terms of the text’s recognition of socialism and unionism as forces for improving the lot of the common people, of Robert Tressell’s The Ragged-Trousered Philanthropists (1914), a novel which, while not published until after the author’s death in 1911, seems to have been written quite a few years earlier. Although Tressell’s style was (as I recall it some half-century later!) a lot plainer than Zangwill’s, there seems a sort of kinship between the two.

The solution to the locked-room mystery, when it comes, might seem pretty obvious today, in that the general device has been used countless times since. But Zangwill got there first, and should be applauded for it.

A big thank you to my blogging pal José Ignacio Escribano for the timely reminder that it was long overdue that I read this book, a Gutenberg copy of which has been sitting on my e-reader for really quite a few years.