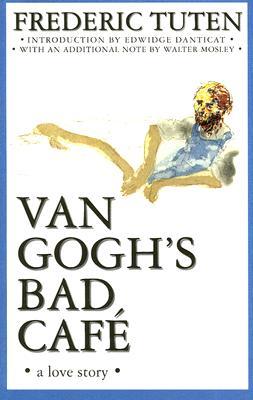 An odd little book that somehow I found myself liking while at the same time not enjoying it very much at all.

One day at the end of the twentieth century, while rambling in Alphabet City, NYC, our narrator meets a mysterious young Frenchwoman, dressed in archaic garb, who steps out of a crevice in a wall. She is, it emerges, Ursula, the lover of Vincent van Gogh. Somehow she has traveled through time and space to be here. At first all she wants to find is a reliable source of the morphine she craves. For his part all the narrator wants is her love, but that’s something she can’t give him because it belongs to Vincent, to whom she’s determined to return once she’s explored this new age. She can be the friend of the narrator (whom she calls Louis, after her morphine dealer back in the old time), and occasionally his lover, but love itself: no.

And so we have two love stories running through the novel: that of the futile love of “Louis” for Ursula and that of the strange but seemingly genuine love between Ursula and Vincent.

Where I had real trouble here was with the writing. I felt I was having to fight my way through the often ludicrous over-extravagance of the language, like an Amazon explorer fighting through the teeming, cloying ground foliage of the rainforest. Some samples:

She put her book in her lap and squinted at him as if he were a marmalade cat she happened upon in a cemetery on the moon. [p21]

. . . because he was nothing but a little impotent nothing — a Dutchman with his canals drained and sluices clogged. [pp86-7]

. . . the coup de foudre, into his brain into his heart into his cock and balls, straight down to his big toe. [p88] [punctuation sic]

After that last little burst of examples I decided, for the sake of sanity, to stop noting them.

And then there are a couple of odd examples of imagery that repeats and morphs as it does so. What do I mean by this? Well, on page 1 the narrator, in his wanderings in Alphabet City, mentions how you might see “a bathtub naked on its side, and through its drain, a lone sunflower . . .” A few paragraphs later, on page 3, we encounter “a bathtub, beached among the flotsam, naked on its side, with an infant cypress tree spearing through its drain hole.” I liked the image the first time and I’m sure would have liked it the second time had I not been flipping back and forth between the two pages going “Huh?”

Again, on page 71 we find that “Her father woke one day when she was nine and thought he had struck his head against the bedpost, but the blow came from seeing her . . .” Just half a dozen lines later we discover that, instead, “It was what her father felt that morning he woke and supposed he had cracked his head on the stone lintel of his bedroom door.” Well, which was it, bedpost or lintel? Or is the point supposed to be that Ursula’s stories are unreliable, not to be taken at face value? In my usual charitable way I strove to persuade myself of the latter explanation, but I remembered the bathtub and its drain hole.

In sum, I felt that Van Gogh’s Bad Café was far too pretentious for its own good: sloppiness of language and imagery does not equate to genius. It has an intriguing, if rather slight, tale to tell; it should not expect the reader to have to struggle so hard to read that tale.