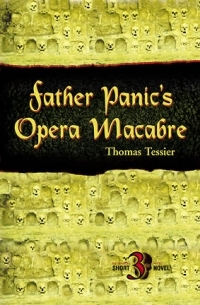 Historical novelist Neil is motoring around Italy when his car breaks down near a big old mansion occupied by a strange group of old people, a forceful priest and a red-hot babe, Marisa. Marisa offers to put him up for the night while the servants do something about his car. Cue a bonkathon. A few days later, as Neil wonders if he really wants to go home, ever, there’s an abrupt transition into a different place and time, where Neil witnesses acts of unspeakable sadism and finds his own life at risk.

There’s a lot of fairly explicit sex in the first two-thirds or so of the book, and for me it didn’t seem very convincing. While I was assured from time to time that Marisa was voluptuous an’ drop-dead gorgeous an’ all that, she never really seemed to emerge as a person. Now, this might be Tessier trying to indicate that Neil never saw past the sex-partner aspect of her — or, more like, never tried to see past it — but I’m not sure I can buy that. He’s a novelist, after all: it’s his job to see below people’s surfaces. Besides, from time to time the possibility of a future with Marisa crosses his mind: you don’t think that sort of thought if your interest in the other person extends no further than worrying if you might have pulled a muscle in the midst of position #43.

Here’s his initial impression of her:

Neil found her very attractive. Marisa’s skin was milky white, with a faint rosy glow, and she had long cascading waves of very fine black hair that was not glossy but had a rich, subdued luster, like polished natural jet. She was about 5’6″ tall and her body was sleek but gloriously voluptuous. Neil wondered what color her eyes were — even through the sunglasses, he could see flashes of light in them.

It’s all on the surface, like something out of a product manual: “Your new appliance is about 5’6″ long by . . .” Yes, I can see him noticing the skin and the hair, but I can’t believe he’d estimate her height (although he might note that she’s quite a lot smaller than him, just up to his shoulder — that sort of thing) or not try to read her character from her smile. Does she read Emily Dickinson in her spare time or bellow at televised boxing matches?

I found the later section of the book pretty abhorrent. I gathered from the notes at the back that the scenes of cruelty and carnage are based on events in Croatian concentration camps during WWII — apparently even the Germans blanched at descriptions of what went on there. That such things really happened does not, I think, offer justification for what’s really just a protracted wallow in sadism — if anything, it seems to me to make it worse.

All in all, then, I didn’t enjoy this book. The author does display a certain narrative ability that shouldn’t be underestimated, but the novel/novella seemed to me to be, in both its sexual and horrific content, a sort of adolescent production. The same went for the plotting, but that’s for another day.