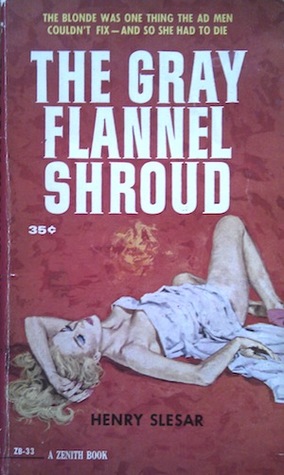 A lightweight, lighthearted piece of slick 1950s crime/mystery fiction that deservedly earned the author the 1960 Edgar Award for Best First Novel — I say “deservedly” even though I imagine there’ll be many a modern reader who’ll be incredulous about the lack of introspective subtext, Freudian gloom and periodic necessity to scurry to the dictionary. I mean, I mean, no bleedin’ angst!

Instead, this is a pretty good example of the kind of fiction that made Fredric Brown’s forays into the genre so timeless. As a bonus, it’s set in a world the author knew intimately, advertising being his professional career.

Dave Robbins, having served in two wars, has ended up on the staff of a Madison Avenue ad agency and in the arms — though not the bed — of Janey, its art director, who, even though enormously talented at her job, just happens to be the niece of the company president. Despite himself, and despite his hopes for his future career — not to mention his prospects with Janey — Dave is dragged into investigating a case of multiple murder that seems to be rooted in the fraudulence of the “Brooke Baby” campaign to promote Brooke Baby Foods. After a few skirmishes with onslaughts on his own virtue, Dave — no surprises here — solves the case.

The denouement’s not quite pulled out of, um, a hat but could almost as well have been, but, if the destination’s a little disappointing, the journey to get there most certainly isn’t. I chuckled pretty often as I read, not just because of some of the characters — like the formidable Countess Szylensca and her marital aspirations for her supposedly repressed daughter Sonya, or the babyfood king Kermit “Cubby” Burke, so homegrown he could make you posset — but also because of a constant stream of snappy repartee. A sampling:

[Notorious crook] Shenk scowled. “Ain’t much to tell. I didn’t knock off Annie. I ain’t the killer type. But I’d like to get my hands on the guy who did.”

“What would you do?” Theringer asked mildly.

Yes, I know, there’s a certain “wait for it, wait for it, wait for it” quality about that last line, but that just had me chuckling the more — I can have a sort of pantomime sense of humor when I went to. But there’s stuff like this, if you’re more of a Coward persuasion, as two ad men discuss a campaign:

I’ve read quite a few of Slesar’s short stories here and there, including at least one collection, but so far as I’m aware this is my first venture into his novels. The copy I have is the 1959 Random House hardback edition (I think the bookclub printing); the 1957 date Goodreads gives to the Zenith paperback reprint appears to be bogus. (As evidence, it was the 1960 Edgar that the novel won.) The binding — jacket long gone — is a kind of sex-aids pink, which is perhaps why no one else had picked up this copy for a song before I found it on the shelf. I assumed when I bought it that I’d eventually recycle it to a library sale or charity thrift shop, but on reflection I like the book enough that it’ll probably go to the “keeper” section of the bookcases.