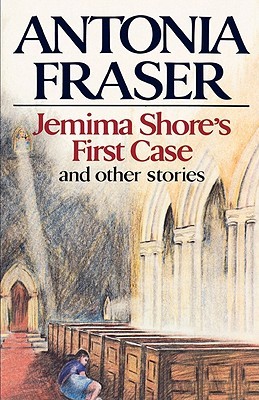 I read a couple of Antonia Fraser’s Jemima Shore mysteries back in the day, and remember them as modestly entertaining. I didn’t catch the TV serialization of Quiet as a Nun, and at most I saw a single episode of the later TV series Jemima Shore Investigates, with Patricia Hodge in the title role. (By contrast, I’d earlier enjoyed Fraser’s biography of Mary Queen of Scots so greatly that it transformed my reading habits: for the next few years historical biographies were a staple of my literary diet. Whatever its scholarly merits — I can’t judge those — Fraser’s biography is a great piece of storytelling.)

So it was nostalgia that recently made me pick up a copy of Fraser’s collection Jemima Shore’s First Case; also a curiosity as to how these tales might have weathered the years. As a quick summation, I found them . . . well, still just modestly entertaining.

The book contains five tales featuring Jemima Shore, investigative journalist for Megalith Television and part-time amateur sleuth. The first of these, the collection’s title story, in fact sees her as still a schoolgirl; it’s more of an adventure yarn than a mystery, as the fifteen-year-old Jemima hazards her virginity in the busting of a drugs ring. The pattern of the “mysteries” being broken down through coincidence, lucky observation and the like, rather than yer outright ratiocination, continues through the other four Jemima stories, the best, most ambitious and longest of which is “The Case of the Parr Children.”

The eight further entries in the collection are a mixture of supernatural stories and sub-Roald Dahl offerings. At the best these are pretty good — I much liked “Boots,” about a slyly murderous little girl, and especially “On the Battlements,” a superbly atmospheric piece slightly let down by a conventionally normative ending. Another fine tale, despite the whopping implausibility at its core, is “The Night Mother.” Some of the remaining tales are . . . less good, but none of them are boring.

My copy of the book, picked up second-hand, is a rather curious edition. It claims to be the first printing of the first US edition (Norton, 1987) but clearly isn’t — aside from anything else, it has a 13-digit ISBN. It looks and feels like a POD production, so I’m wondering if it belongs to that period when major publishers were experimenting with keeping low-demand titles in print through POD. A bit of a curio, whatever the case.

2 thoughts on “book: Jemima Shore’s First Case, and Other Stories (1986) by Antonia Fraser”