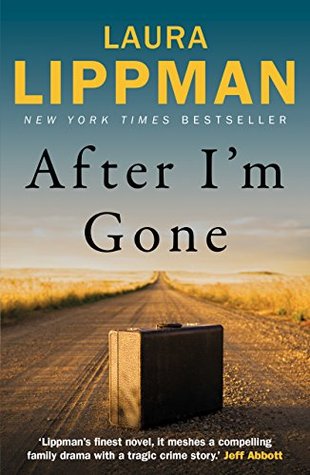 The last two Laura Lippman books I’ve read I enthused about. Although I enjoyed After I’m Gone a fair amount, it didn’t seem to me to hit those same heights.

In 1976 Baltimore numbers crook Felix Brewer fled a hefty prison rap, leaving behind his beloved bride Bambi, their three small daughters and his stripper mistress, Julie. Ten years later, almost exactly on the anniversary of his disappearance, Julie likewise disappeared, and everyone assumed he’d summoned her to join him in his self-imposed exile. Fifteen years after that, though, Julie’s remains were discovered in a remote spot, and it was clear she hadn’t joined Felix but had been murdered — “executed.”

In the here and now of 2012, the Baltimore PD’s elderly cold-case consultant, Roberto “Sandy” Sanchez, sees a photo of the young Julie and is drawn to the mystery of what happened to her . . .

I admire very much the construction of this book. While half the chapters follow Sandy’s investigation in the present, the others — rather than give us a single chronological account of past events, as one might expect of this sort of cold-case novel — make scattered visits (so to speak) to the past, focusing on different characters, their lives, their traumas. We’re shown various stages of the youth and adulthood of the three daughters, dealing in their different ways with the loss of their father and the poverty and notoriety that ensued. But we’re given vignettes, too, of the lives of others in Felix’s old circle. All of this gives the tale a sort of three-dimensionality that shouldn’t be underestimated.

The trouble is that it also makes for quite a stonking great lot of book. At times — especially when reading some of the “visits” to the past when not much seemed to be happening except character development — I found myself impatiently wishing Lippman would get a move on with the actual story. And at the end, when the truth of the matter was revealed, I realized with annoyance that the tale I’d been told was actually a pretty simple one — that a lot of the embellishments were just that: embellishments. I wasn’t even satisfied by the big reveal of the baddie behind it all: although I hadn’t particularly spotted the culprit, the revelation of the culprit’s identity didn’t come as any surprise.

Right at the end, as a coda, a link is forged between Sandy’s further career and that of Lippman’s series heroine, PI Tess Monaghan. I kind of feel that Lippman is a better novelist than should be indulging in gimmicks like this.