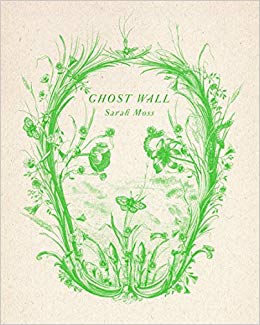 I would probably have loved this had I listened to an audiobook version (not that I ever do listen to audiobooks, but this is just a hypothetical, you understand). As it was, I read the book in the print version and so had to cope with the author’s idiosyncratic ideas on punctuation, which meant that the main emotion I felt toward a tale that could have been right up my street was irritation.

So, the plot in a nutshell. Teenager Silvie is taken with her family, a bunch of students and an archaeology professor to spend a fortnight living in the Northumbrian countryside as the Iron Age population there, the bog people, might have done. Most of these happy campers make greater or lesser compromises with the ideal — the local Spar does good business selling junk food to people in coarse-woven tunics — but they do indeed largely subsist on vegetables foraged from the wilds, mussels, fish, snared rabbits, and so on.

The person who abides by the commitment with absolute conviction is Silvie’s amateur-archaeologist father, who’s as vile a character as you could hope not to meet. Forever enraged about something, Dad knocks Silvie’s submissive mother around and is prone to beating a naked Silvie with his belt for the slightest infraction of his iron rule — or even for no infraction at all, if the mood takes him.

Silvie is befriended by one of the students, Molly, who’s a true free spirit, and through that friendship — more like a crush, on Silvie’s part — begins to open herself to the wider world.

Matters take a turn in the direction of The Lord of the Flies. The re-enactors build a ghost wall in something like the manner of the ancient Celts, although instead of bedecking its uprights with human skulls they use animal ones. There comes the idea that, too, they could mark its construction in the manner it’s thought the bog people did, with a human sacrifice. A virgin, perhaps. And, since Silvie’s the only virgin to hand . . .

The brutish, sadistic Dad is the character who comes across the strongest here: beside him, the novel’s other implied horrors pale. This is by design, of course, because Ghost Wall has a none-too-subtle feminist subtext. Just as among the bog people (it’s assumed), the roost today is ruled by brutish males who do their best to keep “their” females under their thumb or even under their lash. Even the seemingly mild-mannered, avuncular archaeology prof eventually falls into the stereotype. The only male who doesn’t, one of the students, is a milksop who slopes off when Silvie’s life is put on the line. Women must be resourceful and intelligent to resist these monsters.

This all smacks to me a little too much of caricature. Not all men beat their wives and flog their daughters. Not all men bully women. Not all men find patriarchies unobjectionable. And so on. The real world isn’t as clear-cut as that.

Still, I wasn’t too bothered by this simplism; I was perfectly prepared to read the book as a fable, or at least as semi-fabulated, rather than as a realistic depiction. It did, however, make the book’s finale a trifle pat, as brave women gallop to the rescue, tarantara.

As I said at the outset, despite my various qualms, this is a book I’d have enjoyed very much more had its author not forced me to fight my way through various textual thickets created by her deliberate failure to punctuate her text properly. I’ve no objection to difficult texts — far from it — but prissy pretentiousness over mechanical aspects like quotation marks is unclever: just annoying.

Of course, being a mere male I would say that, wouldn’t I?