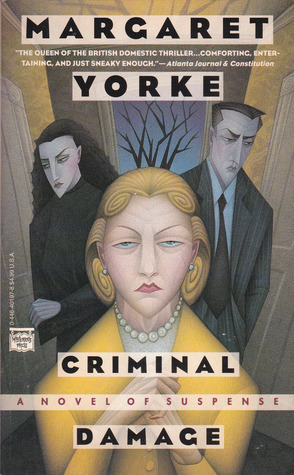 Margaret Yorke’s work is an acquired taste that I never fully acquired, and so, when I saw this novel for sale (with its fabulous cover, by Merrit Deckle), I thought I should revisit her to see if my tastes might have changed after a gap of very many years. The answer is sort of yes . . . and no. I enjoyed Criminal Damage quite a lot, but at the same time I felt it was rather slight, as if it didn’t really have a novel’s worth of things to say. There’s a late revelation that I think is intended to blow our socks off, but I’d picked up the occasional hints earlier and was expecting something of this sort.

The widowed Mrs. Newton never stays in one place too long, shifting from house to house in order to make a living out of the profits she makes from selling each previous home. Now that property values have stalled, she’s stayed in Middle Bardolph for longer than anticipated, although she’s maintained her policy of not making friends in the town. She finds herself, though, drawn to change that rule after a chance encounter with scientist’s wife Lucy Moffat and the discovery that other people, and their lives, can be of interest.

Mrs. Newton’s life is plagued by her two ghastly adult children, neurotic Jennifer — who’s just been dumped by her long-term boyfriend and is taking it spectacularly Not Well — and pompous bore Geoffrey, who’s stuck with a grasping, unfaithful wife. Both Jennifer and Geoffrey are really interested in their mother only as a source of revenue.

In a way, though, this is also the story of Neil Smith, an ineffectual, none-too-bright young man who strayed in his teens and did time in reform school for it, but who’s now determined to go straight. What Neil stupidly doesn’t realize is that older brother Kevin is a crook, and potentially a murderous one . . .

As you’ll gather from the above, Yorke’s focus is on her characters, and the interactions between them; there’s plot, all right, but there’s not a whole lot of it in the earlier part of the book and it has a sort of “secondary” feeling, as if Yorke weren’t much interested in it. (The strapline on the cover, “A Novel of Suspense,” looks a tad silly, because there’s little of it here: the novel’s absorbing, I’d say, but not in any genuine sense suspenseful.) That feeling must of course be misleading because, as I said, she’s acutely interested in the interactions between her characters, and it’s those interactions that drive the plot. Perhaps what I’m trying to get at is that the most interesting parts of the plot are the ones that don’t relate to Kevin’s criminal activities — the non-crime bits, in other words.

There’s a lovely set piece, for example, when Jennifer encounters the ex-Army father of the woman her boyfriend dumped her for: he gently (and gentlemanly) talks her down from the near-crazed fury that she’s been allowing to dominate her life. The longish scene is essentially all quiet conversation, but it had me rapt.

Having re-tested the waters, so to speak, I now view Yorke far more favorably than I have in the past. I won’t be going to any great effort to track down more of her books, but I’ll most certainly be open to picking them up should they cross my path.