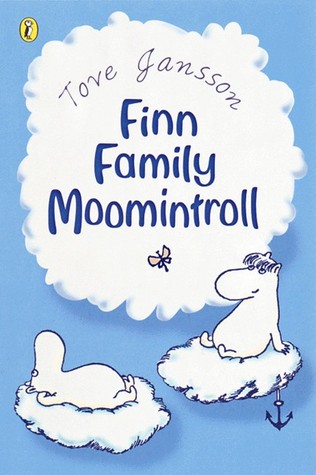 This is actually a reread for me. However, since I romped through all the Moomin books when I was about ten or twelve, I don’t think it really counts as such. That said, I was astonished by how much I remembered from well over a half-century ago. (My wife suggests I may have read it to my daughter when she was small, but I don’t recall doing so — shame on me for this failure of parenting! — and, even if I did, that would still have been, ahem, a respectable number of years ago.)

Moomintroll, Snufkin and Sniff find a stovepipe hat on a mountaintop and bring it home. What they don’t realize is that it belongs to the Hobgoblin, which means that anything put inside it, from a set of false teeth to Moomintroll himself, changes into something completely different — and unpredictably so: you have no way of knowing what the result of the transition will be.

This is the pretext for a set of loosely linked stories relating the adventures through the spring, summer and fall of a single year of the Moomin family and their pals. There’s a wonderfully refreshing pointlessness to the tales, endless inventiveness, and humor that sparkles to the extent that I started to get funny looks while reading Finn Family Moomintroll in the doctor’s waiting room while my wife was undergoing her checkup somewhere in the building’s depths. (One old lady squinted across to see what I was giggling about, then gave me a complicit grin. Clearly another Moomin devotee.)

We watched the completely bloody awful animated movie Moomins and Midsummer Madness (2008) a few months ago, and would advise others to avoid it. (I thought it might give my wife a hint as to why I’m such a fan of the books. Boy, did that backfire.) I understand Finn Family Moomintroll (2014), which I’ve just learned about while checking the title of its predecessor, is better and, although jokes about low hurdles are inevitable, I’m keen to give it a try.

I don’t read Finnish but, to judge by Tove Jansson’s illustrations, Elizabeth Portch’s translation succeeds excellently in capturing the capricious anarchy of the original.