An extremely minor British B-movie that somehow manages—perhaps in part because of its excellent cast—to defy expectations and become, by its end, a remarkably effective piece of suspense.

That’s not what you’d think, though, if you watched only the opening act, which is played almost entirely for comedy, complete with a drunken Irishman and a tight-fisted Scots landlady.

In a provincial small town, baker Joe Frisby (Keen) is being troubled by rats in his flour store, and foolishly calls upon tippling, flaky part-time pest exterminator Alfred Love (Kelly). Despite the laws against using poisons in a food establishment, Love spreads potassium cyanide in his bait, then goes off to the pub to drink his fee. 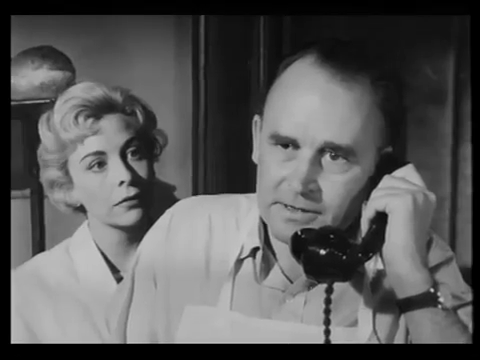 Jane Hylton as Ellen and Geoffrey Keen as Joe

So much for the comedy. Things turn abruptly darker when Love, who’s been built up as the comedy lead, falls down a steep bank and, soon after being discovered in the morning, dies from exposure. His final words are a warning of danger.

The long and the short of it is that some of the cyanide was mixed by Frisby’s wife Ellen “Ellie” (Hylton) into one of the latest batch of loaves that went into Frisby’s oven. By the time the Frisbys, having been alerted about Love’s death and last words by Police Sergeant Malcolm (Jackson), realize the danger, the loaf has been sold—but to whom? 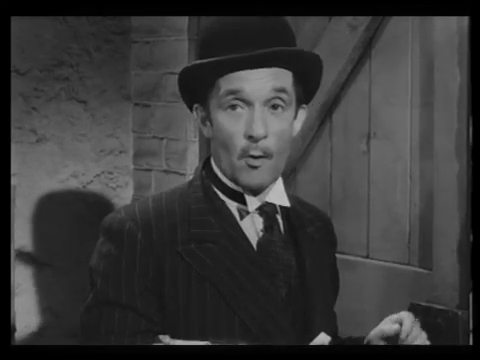 Matters are complicated by Joe’s determination to keep everything secret for the sake of the bakery’s reputation. Once he’s been persuaded to see sense, Shirley Gordon (Lawrence) and her friend Barbara Farrell (Moore), plus Barbara’s baby Bobby, are on their way to a nice country picnic with the lethally contaminated loaf . . .

Clearly there’s a certain about of thematic similarity between the plot of this movie and that of Charlotte Armstrong’s novel A Dram of Poison (1956), although it’d probably be wise not to read too much into that.

It had been decades since the previous time I’d watched this movie, yet some of the later sequences—in which, having failed to feed a piece of bread to the baby, Shirley chucks it to the swans, with dire consequences—had obviously printed themselves onto my youthful mind: the relevant few minutes seemed as familiar to me as if I’d last seen them just the evening before. 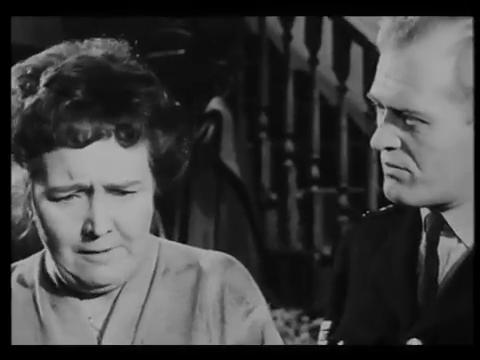 Why did the makers bother with the comedy at the outset? All the funny business, with Dermot Kelly as the drunken Love, Molly Urquhart as his mean landlady Mrs. Tanner and the redoubtable Rupert Davies in a bit part as a pub landlord, seems in hindsight completely superfluous to the movie’s main point, which is to get us onto the edge of our seat and keep us there. Did the producers start out to make a comedy-crime piece and then change their minds? (Budgets for B-features in the UK cinema industry were typically minuscule, so there’d have been no option to reshoot scenes.)

Rupert Davies as the publican

Devil’s Bait turns up on UK television and on YouTube from time to time, and is certainly worth the effort of finding. As I say, it has a sterling cast, so is worth the price of admission on that account alone.