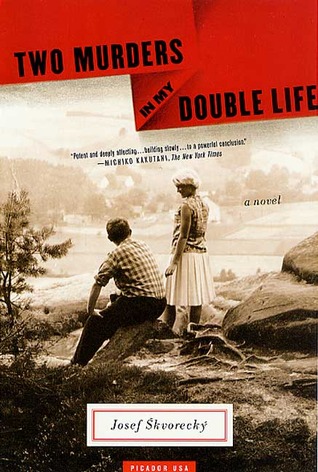 An interesting novel that I didn’t feel quite pulled together, and I’m not sure why. Josef Škvorecký is one of those widely praised writers whose work, to my shame, I haven’t read (until now). This novel, first published in Canada in 1999 (whatever Goodreads might have you think), was his first in English rather than in his native Czech. Perhaps the transition from one language to another inhibited him? Although that doesn’t seem a full explanation either, because my uneases are more to do with structural matters than mere use of prose.

Danny Smiřický, who apparently has appeared as Škvorecký’s alter ego in other novels, is a libidinous but chaste Eng Lit lecturer in a Toronto university(as is Škvorecký); his specialty is in the field of crime fiction, seemingly US pulp in particular. His wife Sidonia is drinking herself to death. She’s doing so because a “list” has been published in post-Communist Czechoslovakia (I assume before the Czech/Slovakia split) that names her as someone who finked to the secret police during the Communist years. The charge has a slight element of truth to it: she was pressured by one of the secret police to rat out her best friend Julie and instead gave him a report that totally exonerated Julie from all crimes against communist rectitude. (Apparently it was okay to bang Bulgarians but not Yugoslavs — who knew?)

Unable, despite a successful lawsuit, to demolish the defamation, Sidonia resorts to the bottle: she’s murdered, in other words, not just by those who would defame her for their own political reasons but also by all those useful idiots who’d rather believe the lies (“there’s no smoke without a fire”) than expend a single brain cell to question whether or not they’re being manipulated. In this sense the novel, which reads very much as pre-internet, seems to herald the era of internet-fueled fake news and disinformation. The phenomenon Škvorecký was writing about in 1996 — the way that evil and powerful agents, from governments to international corporations (hey, there, Rupert Murdoch!) and so on down, can create artificial realities that millions believe — is of course very much in our faces now, as we try to cope with the fact that something like a third of Americans subscribe to government-prescribed conspiracy theories.

Sidonia’s destruction by smear is one of the novel’s two murder stories, and by far the more serious. The other is a sort of comedy of manners, a Golden Age-style mystery that’s happening in the here and now: one of Smiřický’s colleagues, a math prof and campus lothario called Hammett, is murdered in his study. Smiřický, navigating between extraordinarily hot students to whom he must remain no more than parental because of academic responsibilities and his loyal love for Sidonia, eventually, GAD-style, works out whodunnit.

We are, I think, supposed to reflect upon the difference between detective-story mysteries and the real-life destruction of human souls. I’m typing this at a time when Turkey, given the go-ahead by the current US administration, is about to commit what’s widely expected to be an act of genocide against US allies, so pardon me if I seem a bit fucking sour on the “human souls” front.

The characters in the GAD story have names like Dorothy Sayers and Margery Allingham that I seem to have heard before; I’m not sure this sort of stuff is as clever as the author thinks it is. There’s quite a lot else whose cleverness I doubt. One aspect that I had difficulty with was the swirling nature of the past narrative, which seemed to be autobiographical to a fault. In which year were these past events happening? I was never quite certain. Occasionally characters appeared whom obviously I was supposed to recognize yet whom I hadn’t met before. Also annoying were the occasional conspiracy theories espoused by Smiřický/Škvorecký, such as that Ronald Reagan’s seeming later-life muddlement was just a matter of “pinko” TV channels editing his speeches. Yeah, sure, and it wasn’t the dementia at all.

I do truly wish I’d enjoyed this book more. I went into it with a great big cheesy grin on my face. By the time I’d finished it, that grin had faded a bit.

5 thoughts on “book: Two Murders in My Double Life (1996) by Josef Škvorecký”