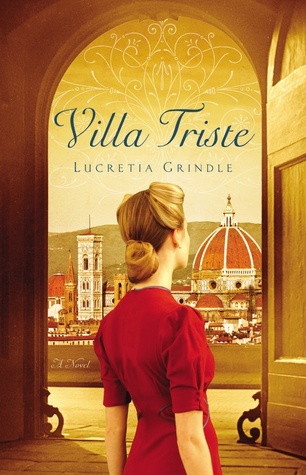 Just what I needed: a new favorite author.

I picked up Villa Triste (original title on its first publication, in the UK although Grindle is a US author, The Villa Triste) as an impulse buy at a library book sale, largely because the sale’s organizer is a friend and I didn’t want to risk offending her by leaving without a few books in my mitts. (That’s my excuse, anyway.) All I can say is: Thank heavens for serendipity, because this is probably the book I’ve most enjoyed all year.

The Villa Triste was the appropriated mansion in Florence where the Fascists and then the Nazis took their victims for torture. (Other torture houses elsewhere shared the name but it’s the Florentine one we’re concerned with. Even the disgusting regimes that use torture are aware enough of their disgustingness that they hide their crimes behind pretensions of virtue and pretty names.) It’s the place above all that Caterina “Cati” Cammaccio dreads as she plies her trade as a nurse in Florence in 1943 and 1944, through the period when Mussolini and his Fascists are ousted and then the Nazis invade to reinstate that tyranny in even more repulsive guise.

Cati and her family despise Fascism. Her younger sister Isabella (“Issa”) and her brother Rico begin working with the partisans, and soon Caterina and her parents are drawn into the resistance efforts. We learn through extended extracts from Caterina’s journal how she was able to exploit her position as a trusted nurse to help her siblings get escaped POWs and Jews out to Switzerland, and of the friends she made among the partisans.

Those journal extracts, interspersed among the rest of the text, make up at a guesstimate some 25% of this very long text, perhaps more. Through them we get a vivid picture of a Florence tormented by the horrors of war and the scourge of the jackboot, and also of a young woman who becomes a hero in spite of herself. As Issa points out at one stage, she, Issa, has no difficulty being courageous because she thrives on danger, but the timid Cati has no such shield: she’s the true hero because she takes all kinds of risks despite her terrors.

The remainder of the book is set in the present day (or thereabouts). Florentine cop Ispettore Alessandro Pallioti is confronted by two murders of elderly men, both of them decorated partisan heroes, both found killed execution-style and with their mouths stuffed with salt — salt being the traditional currency in which the Fascists paid those who betrayed partisans to them during WWII, when salt was scarce. He finds Cati’s journal among the possessions of the first victim, and, as he slowly reads it, becomes convinced that it holds the key to the modern murders . . .

There’s some artifice here, of course — two artifices, in fact. For Cati to have fitted all the words of hers we read into a single pocket-sized notebook would suggest she had to use extremely tiny handwriting. That seems a reasonable hypothesis to explain the other artifice, why Pallioti reads the journal in little dribs and drabs rather than, as would any normal human being and especially an investigating cop, sitting down to whop through it in a single evening: the writing was so small it gave him eyestrain, you see. Or maybe not.

Awareness of these artifices affected my enjoyment of this splendid novel not one single whit. I can recall reading many years ago a 5,000-word short story that had supposedly been written on the back of an envelope by a dying man. It’s known as literary license, and it’s just fine by me.

So, where do I start explaining quite why I loved this novel so very, very much? First, let’s get the obvious out of the way: It’s quite beautifully written. I’m sure that, in a novel over 600 pages long, there must have been an ugly turn of phrase somewhere, but, if so, I didn’t notice it. I was caught up on the very first page — the start of an 80+-page extract from Cati’s journal — and kept in a state of complete entrancement for the duration. People rave about the supposedly elegant prose style of crime writers like P.D. James and Susan Hill (whose prose I find to be the kind of excruciatingly pretentious twaddle that bad but expensive fee-paying schools encourage); both those authors would have done well to take lessons from Grindle, whose text here is supremely elegant yet never ostentatiously so, wonderfully readable yet without making any lowest-common-denominator compromises. The book is just a joy to read.

Then there are the characters. The timorous lioness Cati is the kind of friend we all wish we had more of in our lives; I think I’ve probably fallen in love with her. Issa is a strong character too, although for obvious reasons not as immediately likable. The middle-aged Pallioti and his youthful sidekick Enzo are gloriously human creations; the former is now my favorite Italian cop, surpassing even the late Andrea Camilleri’s Inspector Montalbano. Cati’s and Issa’s papa stands out as someone I think I’d recognize immediately if I met him, and likewise the partisan who goes by the moniker Il Corvo. The list goes on . . .

As for the solution to the murders Pallioti is investigating? It’s not so very hard to unpick, but that’s hardly the point of the novel. The real mystery that exercises the mind — or it did my mind, anyway — concerns which (if either) of the two sisters, Cati and Issa, has survived into Pallioti’s time. I kept hoping it was both.

As perhaps you’ve read between the lines, I liked The Villa Triste a very great deal. Even before I’d finished it I’d invested in three of Grindle’s other novels, and the first arrived today. Expect more Grindle here soon.