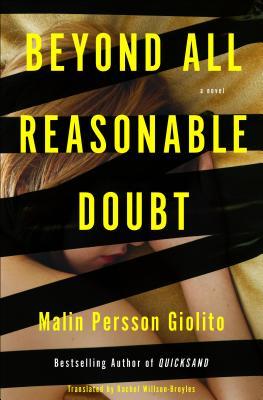 Thirteen years ago 15-year-old Katrin was murdered after consensual but seemingly rough sex. In Sweden as in some US states, the age of consent is 15, so the sex itself was not a pedophile crime. Even so, the cops soon became fixated on high-flying hospital doctor Stig Ahlin, who reluctantly admitted he’d had a sexual relationship with Katrin. When reports emerged that Ahlin was suspected of having sexually abused his infant daughter, the case was as good as done and dusted. Ahlin became the most hated man in Sweden, and has been in barely eased solitary confinement ever since, his sentence specifying that he will never be released.

Lawyer Sophia Weber isn’t interested in reopening the case, but is persuaded to at least have a look at it by old mentor Hans Segerstad. As she does so, she realizes that Segerstad has a point: whether Ahlin was guilty or innocent, he was convicted on circumstantial evidence that was at best flimsy and at worst rigged. Even though reversals of wrongful convictions for serious crimes, and even the permission of a retrial, are (apparently) almost unheard of in Sweden, Sophia decides that, pro bono, she’ll fight Ahlin’s corner . . .

Okay, so one major reason I have burning eyes as I type this account is that I consumed this long (464pp) book in not much over a day, reading ridiculously late on two consecutive nights. More or less from the first page, the novel became an integral part of my life. There was very little by way of Hollywood-style action — no car chases, gun showdowns, fisticuffs — and I suppose that, even though events in 1998, when Katrin was murdered, move ahead pretty swiftly, in the here and now they take their time. Some of the chapters seem to contribute little to the advancement of the plot, however absorbing they might be in themselves and however much they might advance our understanding of the principal characters — none of whom are morally flawless, up to and including Sophia herself. Yet, as I say, I was hooked from the outset. I remained so until the end.

The ending will, I’m sure, dissatisfy some. The whole point of the average legal thriller — or mystery novel of any kind — is that the finale is a definitive solution to the puzzle. Who killed Benjamin Godolphin? Obviously not the dead man’s wife, Daphne Godolphin, The Widow With Two Bikinis, because she’s Perry Mason’s client. But Perry will pinpoint the true killer . . . In Beyond All Reasonable Doubt Malin Persson Giolito chooses to subvert that expectation; we’re left with no such clean-cut conclusion. Yet the conclusion was, for me, completely satisfying.

A large part of my enjoyment of this novel came as a result of Rachel Willson-Broyles’s absolutely sparkling translation. I’ve read a fair number of Scandi novels, but I cannot recall a translation I’ve enjoyed more — to the point that, after finishing Beyond All Reasonable Doubt, I did a quick search for Willson-Broyles’s other translations and made notes of possible novels to read further down the line. It seems she’s also written one novel of her own, and that, too, has suddenly become of interest. Her translation here — aided in terms of readability by, let’s be honest, Other Press’s production standards — is very nearly impeccable (I saw exactly one word I’d have chosen differently).

Back in the day, I used to think Scott Turow set the standard for legal dramas, if not for crime fiction in general. It seemed to me he’d picked up the genre of courtroom thriller, as earlier epitomized by Erle Stanley Gardner and Perry Mason, and turned it into literature, in the same you could argue (I personally wouldn’t) that Margaret Atwood or Doris Lessing had transformed science fiction. Turow’s The Laws of Our Fathers (1996) is, I’d say, a major novel by anyone’s standards; I’d venture the same about Giolito’s Beyond All Reasonable Doubt. I’m now athirst to read her Quicksand , also translated by Willson-Broyles.